Via Negativa: How Not to Speak of God

In a sermon I preached earlier this year, I said the following:

These are beliefs that have been given to them by religion. Not necessarily bad religion, sometimes toxic religion, but usually not. Usually, just religion in general. This is what the Bible is. This is who God is. This is who Jesus is. Many of us come to a point in our lives when these beliefs that we have been given do not seem to be working, but they seem to be so absolute. Rather than do the obvious and change our beliefs, we think we must keep believing these things even though they seem to make less and less sense and take more and more effort to explain. We think we should believe more or pray more or sin less. We think there is something wrong with us when we struggle with our inherited beliefs.

My role as a minister, oddly enough, has been one in which I find myself helping people let go of their beliefs rather than encouraging them to believe harder or to add more beliefs to their collection. This way of letting go—this way of emptying—is a spiritual path. There comes a time when we need to give up those things that we once thought were absolute.

As we begin speaking of God, we recognize that everything we say is inadequate. Everything that we say God is, God is not. The Via Negativa is the stripping away of our idolatries. No matter how wise our conceptions or how vibrant our experience of revelation, we realize ultimately, that we "see in a glass darkly."

When we recognize that nothing can capture God, then we can appreciate the icons of God in our midst. We can appreciate scripture, tradition, stories, language, experiences, and rituals. They are pointers to God, but cannot be identified exclusively with God.

The via negativa begins with the no. God is not. 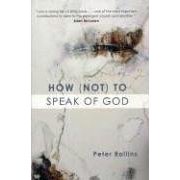 Conversation has emerged about a book by Peter Rollins called How Not to Speak of God. I have not read the book. But I am reading Dwayne's World. He has been reading it and commenting on it. Here are his posts in order:

How not to speak of God, God rid me of God, and the aftermath of theology.

Dwayne includes this quote from Rollins in regards to the problem of idolatry, particularly the idolatry of our doctrines:

You can read an interview with Rollins here. And this is a description of his community called Ikon. It is part of what he calls the emerging movement. Rollins embraces what he calls "heretical orthodoxy." In his interview he describes what he means:

In many respects the idea of ‘heretical orthodoxy’ strikes at the heart of my intellectual project to date. I have become increasingly concerned that much of the contemporary church has taken a wrong turn by embracing the Enlightenment influenced idea that theology is that which speaks of God i.e. theology is that which makes claims about the nature and essence of God. In light of this, orthodoxy has been interpreted as ‘right belief’ and subsequently been employed as a means of identifying those who supposedly possess a correct understanding of God. In this way the orthodox individual stands in contrast to the heretic i.e. to one who holds wrong beliefs about God. In a nutshell I argue that this idea of orthodoxy is both
fundamentally flawed deeply dangerous. In opposition to this dominant view I put forward the idea that orthodoxy, if it is to remain true to the biblical narrative, must be understood as ‘believing in the right way’. This Hebraic rereading of orthodoxy is no mere reversal of the first reading (for the opposite of right belief is simply wrong belief) but rather places it on a fundamentally different level. When orthodoxy is reinterpreted in this manner it no longer needs to exist in opposition to heresy, but can actually embrace it. In heretical orthodoxy we can thus affirm the long lost mystical insight that God is received but never conceived (i.e. that we will always fall short of understanding the God we are in relationship with) and that the mark of this reception is not the manifestation of some doctrinal system that supposedly defines God, but rather is made manifest in the life of one who helps to transform the world in Christ-like love.