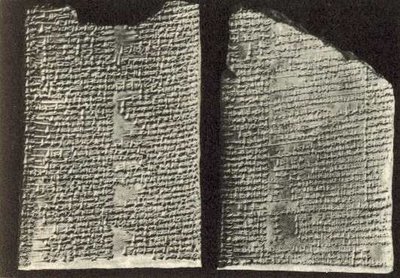 The Enuma Elish, is a Babylonian epic. Enuma Elish is translated as “When on high” and refers to its opening words. The clay tablets found in the 19th century CE date to no later than the 12th century BCE. The poem itself goes back much earlier, perhaps to 1700 BCE or even 2000 BCE.

This poem celebrates Marduk as the king of creation. It was read at yearly festivals. This poem is important for understanding the biblical myths for a couple of reasons.

First, the writers of Genesis 1 would have been familiar with it during their period of captivity in that began in 587 BCE. The influence of Enuma Elish would have likely been part of the collective mythology even before the captivity of the people of .

Second, Enuma Elish holds many features in common, not only with Genesis 1, but other creation accounts in the Bible (ie. Job and the Psalter). It is clear that the writers of the Bible borrowed heavily from this myth as they wrote their own myths.

Tablets four and five describe Marduk’s slaying of Tiamat, the formation of Earth and Sky from her carcass and the establishment of the stars, sun, and moon (represented as gods) who under Marduk’s control keep things going.

This is from Tablet Four:

He constructed stations for the great gods,
Fixing their astral likenesses as the stars of the Zodiac.
He determined the year and into sections he divided it;
He set up three constellations for each of the twelve months.
After defining the days of the year by means of heavenly figures,
He founded the station of the pole star [Nebiru] to determine their bounds,
That none might err or go astray.

Alongside it he set up the stations of Enlil and Ea.
Having opened up the gates on both sides,
He strengthened the locks to the left and the right. (10)

In her belly he established the zenith.
The Moon he caused to shine, entrusting the night to him.
He appointed him a creature of the night to signify the days,
And marked off every month, without cease, by means of his crown.
At the month's very start, rising over the land,
You shall have luminous horns to signify six days,
On the seventh day reaching a half-crown.
So shall the fifteen-day period be like one another-two halves for each month.
When the sun overtakes you at the base of heaven,
Diminish your crown and retrogress in light. (20)

At the time of disappearance approach the course of the sun,
And on the thirtieth you shall again stand in opposition to the sun.
I have appointed a sign, follow its path,
. . . approach and give judgement."

[Lines 25-44 are badly damaged and untranslatable. Apparently after Marduk created the moon he then created the sun (Shamash).]

After he had appointed the days to Shamash, (45)
And had established the precincts of night and day,
Taking the spittle of Tiamat
Marduk created . . .
He formed the clouds and filled them with water.
The raising of winds, the bringing of rain and cold, (50)

Making the mist smoke, piling up . . .
These he planned himself, took into his own hand.
Putting her head into position he formed thereon the mountains,
Opening the deep which was in flood,
He caused to flow from her eyes the Euphrates and ,
Stopping her nostrils he left . . . ,
He formed from her breasts the lofty mountains,
Therein he drilled springs for the wells to carry off the water.
Twisting her tail he bound it to Durmah,

. . . her crotch, she was fastened to the heavens,
Thus he covered the heavens and established the earth.
. . . in the midst of Tiamat he made flow,
. . . his net he completely let out,
So he created heaven and earth . . . ,
. . . their bounds . . . established.
When he had designed his rules and fashioned his ordinances,
He founded the shrines and handed them over to Ea.
The Tablet of Destinies which he had taken from Kingu he carried,
He brought it as the first gift of greeting, he gave it to Anu. (70)

A much condensed version! Note the “demythologizing”. Shamash (the sun god) becomes shemesh (the sun). The moon god becomes the moon. Elohim seems to screw in the light bulbs so to speak.

In Tablet six, Marduk creates humans out of the blood and bone of the slain Kingu, who had helped Tiamat in her uprising:

When Marduk heard the words of the gods,
His heart prompted him to fashion artful works.
Opening his mouth, he addressed Ea
To impart the plan he had conceived in his heart:
"I will take blood and fashion bone.
I will establish a savage, ‘man’ shall be his name.
truly, savage-man I will create.
He shall be charged with the service of the gods
That they might be at ease!
The ways of the gods I will artfully alter. (10)

Though alike revered, into two groups they shall be divided."
Ea answered him, speaking a word to him,
Giving him another plan for the relief of the gods:
"Let but one of their brothers be handed over;
He alone shall perish that mankind may be fashioned.
Let the great gods be here in Assembly,
Let the guilty be handed over that they may endure."
Marduk summoned the great gods to Assembly;
Presiding graciously, he issued instructions.
To his utterance the gods pay heed.
The king addressed a word to the Anunnaki: (20)

They bound him, holding him before Ea.
They imposed on him his punishment and severed his blood vessels.
Out of his blood they fashioned mankind.
He imposed on him the service and let free the gods.
After Ea, the wise, had created mankind,
Had imposed upon them the service of the gods--
That work was beyond comprehension;
As artfully planned by Marduk, did Nudimmud create it--
Marduk, the king of the gods divided
All the great gods [Anunnaki] above and below. (40)

Again, we have a much condensed version. Also, humans are not created from the blood of an enemy to be slave to gods, but are created by Elohim who blesses them.

Genesis 1 reflects a mature development in Hebrew theology. Genesis 1 is no earlier than the 6th century BCE. It is much more sophisticated than Enuma Elish or some of the earlier myths in the Bible itself (Job and Psalms). Genesis 1 is less “mythological” and it has a more positive vision of the creator and humankind.

But, Genesis 1 is still a myth. One of its basic functions was to tell the story of why humans are to work six days and keep the seventh day holy. It tells us nothing about how human beings, Earth, or the universe evolved. It is a myth based on the ancient understanding of the cosmos which I discussed in my last post.