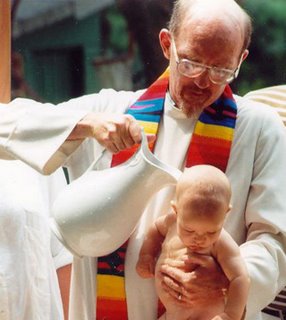 Hal Taussig and Perry Kea will be our speakers for the Jesus Seminar on the Road. Hal (to the left with unnamed and naked baby) is a pastor as well as scholar. Hal serves the Chestnut Hill United Methodist Church in Philadelphia. This image is from his congregation's web page.


So is the following text:

Hal Taussig has been bi-vocational for his entire adult life, being both an active pastor and professor of biblical literature for the past 30 years. He has been pastor at our church since 1990, and enjoys the varied tasks of the pastorate, which in our church range from helping to take out the trash to creative worship design to facilitating ecological projects in the Philippines. Hal (as he prefers to be called) has a family that includes his partner Susan (also a pastor in the United Methodist system), a grown son and daughter, and a granddaughter. He enjoys a wide-range of sports, is always looking for a good film, and loves Motown music and jazz. He has also been pastor of Calvary United Methodist Church in West Philadelphia for 13 years, the Oekolompad Reformed Church in Basel, Switzerland, and Falls United Methodist Church. He is currently on the graduate faculty at Union Theological Seminary in New York, the Reconstructionist Rabbinical College in Wyncote, Pa., and Chestnut Hill College in Philadelphia. His books include A New Gospel of Community: Reimagining Life Together in America (with Catherine Nerney, SSJ, forthcoming this year); Jesus Before God: The Prayer Life of the Historical Jesus; Reimagining Christian Origins (with Elizabeth Castelli); Wisdom's Feast: Sophia in Study and Celebration (with Susan Cole and Marian Ronan); and Many Tables: The Eucharist in the New Testament and Liturgy Today (with Dennis Smith).

Not listed on his web page is his latest book, A New Spiritual Home: Progressive Christianity at the Grass Roots (Santa Rosa, CA: Polebridge Press), 2006.

We celebrate the big names in progressive scholarship (Robert Funk, Marcus Borg, Dominic Crossan, John Shelby Spong, Elaine Pagels, Karen Armstrong, etc.) We should. They have written important works and have made and continue to make valuable contributions.

In addition to the big names, there are many other scholars (and associates) within Westar who have made valuable contributions as well (such as Patricia Williams who I featured yesterday) and Hal Taussig (who I am featuring today).

As Hal's title suggests, progressive Christianity does grow from the grassroots.