Shuck and Jive award to Numan's Bar and Grill in Johnson City and to the Johnson City Press for the front page coverage of this fun, educational, and soaking wet protest to the new gun law. 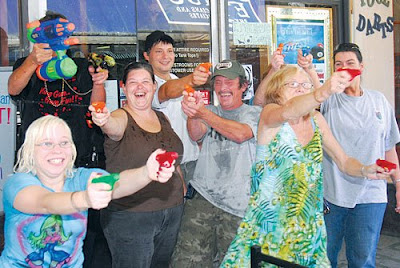 The same day that legislation allowing carry permit holders to bring firearms into restaurants that serve alcohol went into effect, Numan’s staged its own protest of the law by inviting its employees and customers to take part in a mass water gun fight.

“It turned out it was incredibly successful,” Numan said amid streams of water passing by. “Everybody just had a ball.”

The filled water pistols were given to customers as they came through the door, and Darlene “Potshot” Ponzio quickly armed herself. While she said she was having a blast with the water guns, she had other thoughts on the idea of real guns in bars.

“I think it’s fun. I think it’s great,” she said of the protest, “and I think it’s stupid they would let guns come into a bar in the first place. That was a stupid law they put in. That’s ridiculous.”

Numan said Ponzio’s feelings on the legislation seem to be the consensus among his customers.

“I got a good, wide range of people who come by and everybody is telling me I’m doing the right thing by protesting this,” he said.

Aside from the water gun fight protest, Numan is also leaving up a petition in his bar.

“I know that all my customers are going to be signing this, and I’m trying to get a thousand signatures this week,” he said.

This is a great protest. Good use of symbolism. Front page coverage. Opportunity to do something (sign a petition), educational, and fun. There is nothing like lightheartedness to spoof the mood of paranoia in our country being placed upon us by the gun lobby.