"A Church Out There For All of Us" --Trial of Rev. Jane Spahr 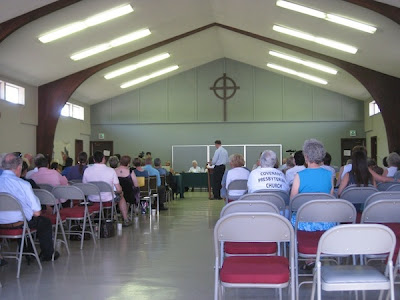 I wish I were in California listening to the testimonies at the trial of Rev. Jane Spahr. I wish the entire church could hear them.


Rev. Spahr officiated at 16 same gender weddings in 2008 when marriages were legal in California. Many of the couples are testifying at the trial as to what it means for them to be married in the church.

This is from the Bay Citizen:

David Hanson and Jeff Owens of Santa Rosa were married twice — the second time in a church by Spahr in 2008.

“Both weddings were very special and very memorable, but the church wedding, it felt more established, it felt more real — we are really a married couple,” said Hanson. “As I became an adult, I stopped going to church at all. Janie has showed me that there is a church out there for all of us.”

That is why Rev. Spahr, many of my other clergy colleagues, and I extend a full welcome including weddings for gay and lesbian couples in the church as ministers with all the holy mojo we can muster. It is why the church needs to praise and thank ministers who do this work instead of taking them to church court.

"Janie has showed me that there is a church out there for all of us."

This particular story has a fun ending:

Hanson, who has been with Owens for 17 years, testified that he didn’t want to get married until he saw Spahr officiate at a ceremony for their friends. That changed his mind, but it would be another two years before the first wedding. The reason? “We were wedding coordinators — it had to be perfect, Hanson said. Even the elders on the commission, officially known as the Permanent Judicial Commission of the Redwoods Presbytery, laughed at that remark.”

If you think clergy and congregations need to be free to provide pastoral care for all their members, you might consider putting your name on the line and sign the Minneapolis Declaration of Conscience. Anyone can sign, but we are particularly looking for Presbyterian elders, deacons, and clergy.