Update: Check this article. This is very important. It is about the World Energy Outlook (WEO) by the International Energy Agency (IEA). The IEA mentions Peak Oil for the first time... 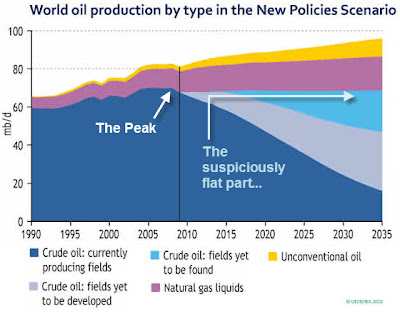 First, pay close attention to the legend for the chart. Starting at the bottom, note that crude oil from "currently producing fields" (dark blue) is already in sharp decline and is expected to decline from a high of 70 mbd in 2006 to ~15 mbd in 2035; a loss of 55 mbd over 25 years, or 2.2 mbd per year. The next band up (gray) is crude oil from "fields yet to be developed," which we largely know about but have not yet really started producing significantly.

My only comment here is that these fields cannot overcome the expected rate of loss in the dark blue band below them. All of the conventional oil that we know about is now past peak. In order to keep conventional oil flat, we have to move up to the third band (light blue), which goes by the spine tingling name "fields yet to be found" - which will apparently be delivering a very hefty 22 mbd by 2035. In other words, the IEA is projecting that in 25 years, more oil will be flowing from "fields yet to be found" than from all the fields ever found and put into production by the year 2010.

Colin Campbell, one of the earliest analysts of peak oil who has decades of oil field experience, is on record as saying that the "fields yet to be developed" category, originally introduced to the world as unidentified Unconventional in 1998, is a "coded message for shortage" and was, off the record, confirmed as such by the IEA. That coded message is getting easier and clearer to receive by the day.

Your midnight movie is from the UK. This is from 2006 before we had $140 a barrel oil in 2008 and before the financial crash. The film is set in 2016 and is a combination of fiction plus documentary about Peak Oil.

It has a bad title, If the Oil Runs Out.

Oil "running out" is not the issue, of course. We are experiencing the global peak of oil production. It is the end of cheap oil--the stuff that built everything we have. That is why tar sands and all that other doesn't matter. Sure, we can extract hydrocarbons (with huge environmental costs) but the rate of their extraction can never be enough to replace liquid petroleum.

Here is your midnight movie. The drama focuses on the changes families will experience.