Military is Preparing for Peak Oil (Civilian Authorities Are Not)


Your midnight movie is another powerpoint from the recent ASPO (Association for the Study of Peak Oil and Gas) Conference. Hope you have time to look at all of it, but if not, here is a summary of the key points: 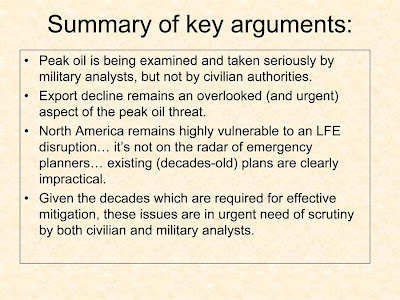 We are not prepared.

This is from the Business Insider:

Various military reports have come out recently that analyze the apocalyptic threat posed by peak oil. The most notorious of these, from a German military think tank, warned of market failures and a crisis of political legitimacy and proposed ways to manage the risk.

Nothing comparable, however, has been issued by U.S. civilian authorities, like the FDA and the DoT.

Energy Securities Analyst Rick Munroe made these claims in an awesome presentation at the recent ASPO-USA conference.

He says we're ignoring a major strategic shock that has been visible for decades.

You get a double feature tonight. Here is a clip from former Secretary of Defense, Secretary of Energy, and CIA Director, James Schlesinger. I liked this memorable quote:

"Like the inhabitants of Pompey who ignored the neighboring volcano, Vesuvius, until it detonated, the world ignores the possibility of Peak Oil at is peril."

You know you are listening to a military man when volcanoes "detonate". You can read a transcript of his speech. Here is some truth. In fact, these are the basics:

Secondly, you cannot produce oil unless you first discover it (a contribution by Colin Campbell).

Third, a resource that is finite cannot continually have its production increased.

And now, your second feature:

Dr. James Schlesinger "The Peak Oil Debate is Over" from ASPO-USA on Vimeo.