Jesus came from Nazareth, Galilee, and was baptized in the Jordan by John.

Then Jesus was guided into the wilderness by the spirit to be put to the test by the devil.

And after he had fasted ‘forty days and forty nights,’ he was famished. And the tester confronted him and said, “To prove you’re God’s son, order these stones to turn into bread.”

He responded, “It is written, ‘Human begins are not to live on bread alone, but on every word that comes out of God’s mouth.’”

Then the devil conducts him to the holy city, sets him on the pinnacle of the temple, and says to him, “To prove you’re God’s son, jump off; remember, it is written, ‘To his heavenly messengers he will give orders about you, and ‘with their hands they will catch you, so you won’t even stub your toe on a stone.’”

Jesus said to him, “Elsewhere it is written, ‘You are not to put the Lord your God to the test.’”

Again the devil takes him to a very high mountain and shows him all the empires of the world and their splendor, and says to him, “I’ll give you all these, if you will kneel down and pay homage to me.”

Finally Jesus says to him, “Get out of here, Satan! Remember, it is written, ‘You are to pay homage to the Lord you God, and you are to revere him alone.’”

Then the devil leaves him, and heavenly messengers arrive out of nowhere and look after him.

Do you renounce evil and its power in the world?We don’t often get asked that question. Nor do we often ask it of ourselves or others. But today we ask it. We ask it formally and liturgically. We ask it as we are celebrating new members joining our congregation by affirmation and reaffirmation of faith and by baptism.

That question, put pointedly and starkly:

“Do renounce evil and its power in the world?”

doesn’t sound very polite. It doesn’t sound even “progressive.” We don’t talk about sin and evil anymore do we? Haven’t we left that language behind? Only the Bible thumpers talk like that, right?

If we have given up on that language it is our mistake. I think there is such a thing as evil. Progressives do use that language. Don’t let our poetry and liberal theology fool you. We are all about naming, facing, resisting, and renouncing evil. It begins with ourselves. This is point eight of the eight points of progressive Christianity:

Recognize that being followers of Jesus is costly, and entails selfless love, conscientious resistance to evil, and renunciation of privilege.

That is a good phrase: conscientious resistance to evil.

Yesterday, six people were killed and twelve injured by a gunman in Arizona. One of the injured is congresswoman Gabrielle Giffords. She is believed to be the target of the attack. This is evil. But we need to say more. What is this evil specifically? What exactly is the locus of the evil?


And yet that same book also said that humankind is created in the image of God.

It is confusing. It is complex.

There is such a thing as evil. But it is hard to know exactly what it is and where it is and what we are to do about it. Yet we are asked:

For those of us in the Jesus tradition, our model of resisting evil is Jesus of Nazareth. After his baptism, the text says he was led by spirit into the wilderness to be confronted by the adversary, the satan.

In Hebrew mythology the satan functioned as the prosecuting attorney in the heavenly court. He is the official tester. This is the same character who tested Job. The fact that spirit leads Jesus to the wilderness shows that this is a test of his integrity. This is something he needs to go through. It is part of his spiritual path. Will he have what it takes to resist evil?

This is of course a legendary story, yet even historical Jesus scholar, Bob Funk of the Jesus Seminar felt compelled to include the temptation scene in his book, The Gospel of Jesus. He thought this scene went back in some sense to the historical person. He thought that Jesus probably did go on some sort of vision quest, a time of fasting and self-purifying, to discover who he was and what kind of business he was to do. It is a story of integrity.

The story is powerful and true. 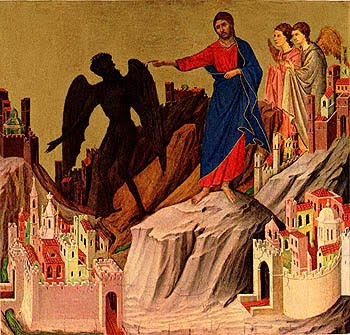 It is a story of renunciation of evil. On one hand, the three things that Jesus renounces don’t really seem that evil. Turn a stone into bread, test to see if God will keep promises by jumping off a building, show allegiance to something other than God, well…those are things that don’t seem that large on the evil-meter.

There is a sense in which we all do them.

Turn a stone into bread. The assumption here is that not everyone can do that. But Jesus can. The temptation here is for Jesus to use his privilege for his own benefit. We know how this can become evil. History and current headlines are replete with powerful, privileged individuals and groups securing “bread” for themselves. Maybe it is not wise for us to turn all stones into bread, all mountains into coal, and all forests into lumber. Just because we can doesn’t mean we should. Resisting evil is resisting the temptation to use power and privilege for our gain at the expense of others and perhaps in our time at the expense of nature. Jesus could do it, but refused to do it. Humans do not live by bread alone. There is something more important at work, namely integrity.

Jump off a building. This is the temptation to view oneself as exceptional. We are chosen by God. We are special. We are good and moral. Other nations and other empires may do bad things. But not us. We are favored. When we invade another country it is for their own good. This is the temptation to self-deception. This is the congressperson who says we don’t need to worry about climate change because the Bible says that God won’t destroy Earth. Great evil is done by people who think they are somehow above law, either nature’s law or human law. Jesus won’t buy it. “Don’t put God to the test,” he tells the tempter. We renounce evil when we renounce the temptation to see ourselves as exceptional. We are human no more no less than anyone else.

Worship the satan and gain the world. This is the heart of evil. The temptation is to sell our soul—to sacrifice our integrity for material gain. We have sold the idea of distributive justice and sustainable economics for the illusion of infinite growth. We have sacrificed Earth and Earth’s people and our non-human relations for an ideology of growth that cannot be sustained. We worship growth and profit and have created a monster that we can no longer control. As Thomas Berry wrote:

“The ideal is to take the greatest possible amount of natural resources, process these resources, put them through the consumer economy as quickly as possible, then on to the waste heap. This we consider as progress.”

Jesus said no. Worship God alone. That meant I think that there is no ideal, no rationalization that is more important than justice, compassion, and right relation of humanity and Earth.

When we ignore all of these things the first thing to go is non-violence. Violence is the fruit of ignoring our call to be human beings. Jesus' baptism and testing in the wilderness is a model for our own personal integrity. It is recognizing that as we see evil out there it is also within.

Jesus renounced evil by being creative. Against evil and its power, Jesus used words. He used his artistry as a wordsmith as a teller of parables as a teacher of compassion and justice. Jesus was no guilt-ridden wimpy liberal. He called evil by name and he called people out. He did the inner work to discover his own integrity but then he went to work and he named evil in high places. He spoke truth to power. He renounced evil and its power in the world.

We can do likewise. We can and need to point it out.

In a tense atmosphere in which unstable people have access to guns, when a nationally known political figure creates a map with rifle target sites on her political opponents like Gabrielle Giffords, that is just not cool.

In response to this tragedy and to this evil and to the evil of violence, we will tap in to resources within. We will discover creativity and direct it toward compassion. Right now, there are vigils, there are facebook pages, there are sermons preached, there are prayers spoken, there are people uniting to share their grief, to offer love and compassion, and to imagine a more peaceful, just, and kind world.

That is what makes us human.

We are created in the image of goodness, love, and blessing. That is who we are at our core. We are in turn creative and we have goodness, love, blessing and healing to share. Evil is a distortion. It is powerful but not ultimately so.

That is how we will renounce evil and its power in the world.

To that question we can respond,