The ABCs of Michael Adee

Friend and colleague, Michael Adee, was interviewed by ABC news. Michael is the field organizer for More Light Presbyterians. I have pasted that article at the end of this post.

MLP is a national organization within the PCUSA to change discriminatory policies against glbt people. Here is MLP's mission statment.

Overall, the article is good, although I have a couple of critiques. Here is the first sentence:

"Michael Adee is one of the very few openly gay elders in the Presbyterian Church. He was ordained by a liberal church in Santa Fe, New Mexico -- a direct violation of church law."

I am not sure, but I think that is the opinion of ABC News, not Michael. Openly gay people have been ordained in the PCUSA all over the country, and many church courts have upheld these ordinations.

Church law is gray in the PCUSA, especially when it comes to discrimination and prejudice. It is difficult to write discrimination directly into constitutions. You have to hint at prejudice without saying it. The big hammer, G-6.0106b says nothing about sexual orientation. What then does it mean to be "openly gay" and how does being "openly gay" violate any church law? MLP has a helpful list of FAQs regarding our church polity. The first question is, "Can my church ordain an openly lesbian, gay, bisexual, or transgender person as an elder or deacon?"

Answer: Yes! (This was before the Task Force Report was passed at GA this summer!)

Don't misunderstand. We have discrimination written into authoritative documents in our church. They need to be exposed, belittled, and removed. That is why I wrote against the Task Force report last February. See Not Justice, Not Progress, Just the Same Second Class Status.

The report (which did pass) may make for small progress (we won't know until the court system adjudicates a few cases) but it is a long way from justice. My second quibble with the article is this paragraph:

The debate over whether gays should be ordained is getting louder and more rancorous throughout denominations across the country and is threatening to rip apart congregations. The battle over homosexuality comes at a time when church membership is declining and congregations are struggling to hang on to the members they have.

I have heard in many different ways that speaking against discrimination of gay people is distracting to the church. Fearmongers tell us that we lose members if we talk about prejudice and injustice and work to change it.

I simply have to call bulls__t on that. It is not the debate that "is threatening to rip apart congregations." It is the injustice, ignorance, homophobia, and fundamentalism that has already ripped apart congregations and families and our nation. Prejudice against sexual and gender minorities is bad. It is wrong. The church will not be healed until this evil is exposed for what it is and removed. This will require courage on behalf of intelligent Presbyterians to address fundamentalist/homophobic aggression.

Before we get to Michael's interview, I have yet another book suggestion. It is a powerful book. It speaks to the issue of fundamentalism and its use of homophobia to divide our country and to promote a theocracy.

The author is Mel White who was the ghost writer for Jerry Falwell and Pat Robertson. White knows from the inside who these guys are and what they are about. In addition he exposes D. James Kennedy and James Dobson and their agenda. 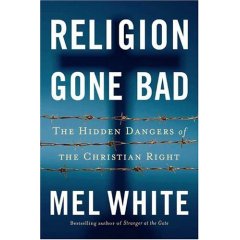 Mel White is a gay man and evangelical Christian. He is the founder of Soulforce that uses the principles of nonviolent resistance to eradicate political and religious oppression for gay, lesbian, bisexual, and transgender people.

The Reverend Mel White, a deeply religious man who sees fundamentalism as "evangelical Christian orthodoxy gone cultic," believes that it is not a stretch to say that the true goal of today's fundamentalists is to break down the wall that separates church and state, superimpose their "moral values" on the U.S. Constitution, replace democracy with theocratic rule, and ultimately create a new "Christian America" in their image. White's new book, Religion Gone Bad, is a wake-up call to all of us to take heed. (Link)

Dec. 9, 2006 — - Michael Adee is one of the very few openly gay elders in the Presbyterian Church. He was ordained by a liberal church in Santa Fe, New Mexico -- a direct violation of church law.

Adee would like to take the next step and become a pastor who performs sacraments such as baptism and marriage, but that's unlikely unless the church changes its policy.

Asked if he has a problem with being a member of a denomination that refuses to ordain gay and lesbian ministers, he answered, "Yes, I would be disingenuous if I say anything else."

But Adee has turned his disappointment into activism. For the past five years, he has headed up an organization called More Light Presbyterian, which through media outreach promotes the inclusion of gays and lesbians in every part of the church -- both as members and as leaders.

Under his tenure, the number of More Light churches supporting gay leadership has grown 30 percent.

"While it's still the tip of the iceberg, it's radical progress in a short time," he said.

Adee has taken his message of acceptance to the pulpit -- traveling to churches across the country and speaking to congregations who have never heard an openly gay minister preach.

"Not only am I a person of faith and a Christian," Adee told the congregation at Capitol Hill Presbyterian Church in Washington, D.C., "but I am gay."

After the service, member Emily Counts compared Adee's words of acceptance for gays in the church to those of advocates of the civil rights movement who built support by taking their message to individual churches.

"Maybe not all churches are ready to hear it, but I'm not sure it's a reason not to approach the issue," she said. "There has been a long history of what people have stood up in the pulpit and said. It's obviously torn congregations apart. But it's also been an important platform."

Adee is confident the Presbyterian Church will eventually accept the ordination of gays. Just this summer, the Presbyterian general assembly voted to allow each local congregation the power to consider whether or not to ordain gays.

But that decision angered conservative Presbyterian churches, such as Kirk of the Hills Church in Tulsa, Okla., which broke with the denomination. Its pastor, the Rev. Tom Gray, explained his reason for the separation on his blog.

"The PCUSA [Presbyterian Church USA] rejected clear, important Biblical injunctions on sexual behavior in order to adjust to our culture's standards," he wrote.

The debate over whether gays should be ordained is getting louder and more rancorous throughout denominations across the country and is threatening to rip apart congregations. The battle over homosexuality comes at a time when church membership is declining and congregations are struggling to hang on to the members they have. Read the rest of the article at ABCnews.com