Sometimes it is hard to separate fantasy from fiction. I will let you decide. Which of the following is true? 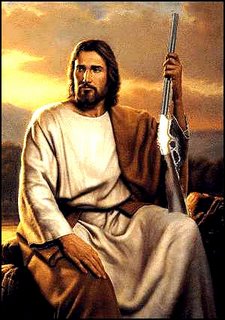 HEAVEN, October 29 – Lord and Savior Jesus Christ admitted today that’s he’s puzzled over the upcoming U.S. elections. “It seems like just yesterday,” he told The Pox, “that the big issues were guns, abortion, homosexuality, the flag…you know, my issues. Now, it’s like I don’t even exist. It’s not just demoralizing, it’s humiliating.”

Mr. Christ said he knows that many Americans are concerned about falling incomes and health care, but, he said, “These days I haven’t been into, you know, social justice and lifting up the poor. I’ve been into stamping out sin – or some sin – whatever George says it is.”

Jesus told The Pox, “Maybe it’s time for me to re-invent myself. I can do it, you know. I’ve been all kinds of things. For a few years, I’ll be the minimum wage guy; people will love it. The problem is, then you have to decide how high to raise the minimum wage. With guns and abortion, my people could just say yes or no and that was that.”

Or, said Christ, he could just wait it out. “I’ve been around for 2000 years or so,” he said philosophically, “I could just hang till this right-wing stuff comes back. I don’t know…I’m so confused.”

Don't think Jesus is one tough gangbustah? Check out Wrestling for Jesus. This is from their website:

"Hello and welcome to a ministry the Lord has His hands upon! We are a group of dedicated Christians who love the Lord and Professional Wrestling. We've put our two loves together and found a perfect match for spreading the Good News!"

Here is a media clip.

#3
How about a Jesus Vs. Muhammed Grudge Match? Check this out from Newsmutiny: 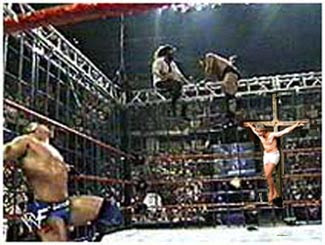 Billed as the “Holy war to end all holy wars” the main event wrestling match between the Christian messiah Jesus Christ and the Islamic prophet Mohammed at World Wrestling Entertainment’s “Unforgiven” pay-per-view special quickly deteriorated into complete Armageddon with no clear winners last night after the two combatants refused to fight each other and instead were badly beaten by other wrestlers who interfered in the match.

Madison Square Garden in New York was a seething cauldron of hostility prior to the showdown as Christian and Muslim adherents alike eagerly anticipated a resolution to centuries of religious discord – which had been inflamed in the days leading up to the “Final Judgment” by WWE promotions featuring interviews with entourage members of each of the holy icons.

Jesus Christ’s self appointed wrestling manager William “Jerry” Boykin, well known for his vitriolic tirades against Muslims while a Lt. General in the US Army, grabbed a microphone during a press conference Friday and screamed, “Muslims are the pigs of Satan which makes Mohammed a king of pigs! His treachery and weakness will be revealed by the divine jackknife powerbomb and guillotine leg drop of Jesus!”

Mohammed’s self appointed manager, Abu Mussab al-Zarqawi, shot back, “Jesus read his sermons off the backs of ancient bubble gum wrappers. He could not carry the holy leotard of Mohammed and will choke on his mighty claw of Allah!” (Read More...) 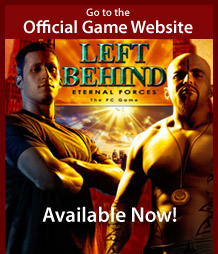 This is from their webpage:

LEFT BEHIND: Eternal Forces is a Real Time Strategy game. You, as the player, control your forces from a vantage point high above the action. You do not personally participate in the action; you command your units to perform tasks by giving orders via the game interface. You can order them where to go and what to do whenever you wish.

The second bullet (bold and italics mine) is my favorite. The combination of prayer and modern military weaponry is used against the "bad guys" who are the "AntiChrist's Global Community Peacekeepers." Is this an allusion to the U.N.? Get a tour of New York City while you blow it up for Jesus!