Janet Edwards in the Blade 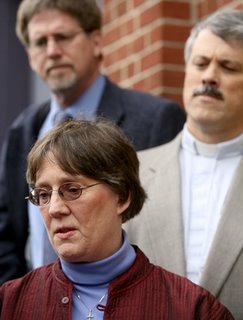 Here is more on Janet Edwards from the Washington Blade. I posted about her trial for marrying two women here and here.

(Name the two PCUSA ministers behind her in the photo for extra credit!)

The case was dismissed because of a technicality. According to Janet, it is legal to marry gay and lesbian couples in the PCUSA. This is from the Blade:

It’s becoming increasingly difficult for many gays and lesbians in the U.S. to keep their faith.

In the last few weeks, a Presbyterian Church (USA) minister faced being defrocked for marrying a gay couple in Pittsburgh, the Baptist State Convention toughened its anti-gay stance and bishops in the Catholic Church described gays as “disordered.”

Many Christian denominations have been forced to either reaffirm or reconsider their positions on gay issues in the last few years.

The Permanent Judicial Commission of Pittsburgh dismissed charges last week against Rev. Janet Edwards, a Presbyterian Church (USA) minister, who married two women in a 2005 ceremony. The eight-member commission panel determined Nov. 15 that the charges against her were filed four days after the statute of limitations had expired.

In a post-ruling interview with the Blade, Edwards said she was eager to present the case for same-sex marriage in court but was relieved a lengthy court battle was averted.

“I had discovered the disciplinary process was not a good place to engage in dialogue over the welcome we must give the gay, lesbian, bisexual and transgender children of God,” she said. “I will work hard in all the other means we have in the church to dialogue with those who disagree with me on the place of gay, lesbian, bisexual and transgender people in our community.”

The wedding ceremony of Nancy McConn and Brenda Cole came to the attention of the Pittsburgh Presbytery after the couple placed a wedding announcement mentioning Edwards as presider in the Pittsburgh Post-Gazette newspaper. The wedding caused a furor among some of Edwards’ more conservative colleagues of the presbytery and a complaint was lodged against her. Edwards is the third Presbyterian minister in recent years to come under scrutiny from church authorities. Two other ministers, Jane Adams Spahr of San Rafael, Calif., and Stephen Van Kuiken of Cincinnati, have also battled with their presbyteries after marrying same-sex couples.

Edwards narrowly averted a court battle, but said she would endure the process again, risking everything to join two as one.

“I will work with the couple to develop a service that marks God’s blessing of their love and commitment,” she said. “I will also be honest with my colleges at the Presbytery about the doing of this and engage them in serious conversation with those who disagree.”

Edwards, who is bisexual, has been married to her husband Alvise for 25 years and has two grown sons. She was ordained by the Pittsburgh Presbytery in 1977, served as moderator in 1987 and is now an “at large” minister. She also works as a parish associate with the Community of Reconciliation, a multi-faith, inclusive congregation. She is a direct descendant of Jonathan Edwards, the influential Evangelical theologian who was born in 1703. Like her famous ancestor, Edwards is a strong proponent of reform in her church, but she knows change takes time. She said it took her church nine years after the Stonewall Riots to issue a statement on gay issues.

“Change takes time,” she said. “It doesn’t go in a straight line, but forwards, backwards and sideways. I hope we have reached the tipping point were the question isn’t whether — but when — we will include our gay, lesbian, bisexual and transgender children. In my church, I think we have.” (Read more...) 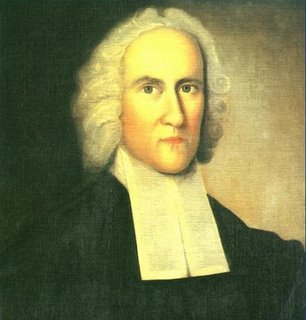 Here is a painting of her direct ancestor, Jonathan Edwards. He would be proud of his descendant.