The first is that from media reports it is hard to know what the G20 summit is about and why people are protesting it. It is more than good guys vs. bad guys or police vs. "anarchists." 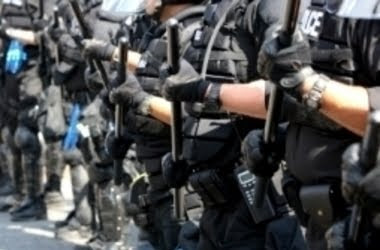 The second is that riot police are looking more and more like Star Wars characters and they seem to be trying out new toys on U.S. citizens.


This is from CNN; one of their reporters was tear gassed. Police for the first time on American citizens used a "sound cannon."

This is from the Guardian:

Only a few hundreds protesters took to the streets of Pittsburgh to mark the opening day of the G20 summit of world leaders, but the police were taking no chances.

Sonic weapons or long-range acoustic devices have been used by the US military overseas, notably against Somali pirates and Iraqi insurgents.

But US security forces turned the piercing sound on their own citizens yesterday to widespread outrage. Pittsburgh officials told the New York Times that it was the first time "sound cannon" had been used publicly.

The sonic weapon appear to be more effective than the Metropolitan police's highly contentious kettling tactics used against G20 protesters in London. But it is equally controversial.

It is feared the sounds emitted are loud enough to damage eardrums and even cause fatal aneurysms.

PITTSBURGH – A vociferous but peaceful group of several thousand people marched for miles through downtown Pittsburgh on Friday, united by opposition to the Group of 20 summit but expressing a diversity of mostly liberal causes as an army of stone-faced riot police watched their every move.

Dozens of black-clad anarchists were conspicuous among the demonstrators, but there was no sign of the disturbances that had resulted in arrests and property damage a day earlier.

The main message of the so-called Peoples' March to the G-20 was a demand for solutions to the planet's economic and environmental challenges different than those the world's richest countries are pursuing. ...

....Friday's march had some marked differences from a Thursday afternoon march that ended with clashes between police and anarchists.

The Thursday march, far smaller, did not have a permit and police declared it illegal almost as soon as it began. Small bands of anarchists responded to officers' overwhelming show of force by rolling huge metal trash bins, throwing rocks and breaking windows. Police fired bean bags and canisters of pepper spray and smoke.

Later that night, hundreds of officers surrounded what was mostly a large gathering of University of Pittsburgh students in the city's Oakland neighborhood. The area was adjacent to where G-20 participants opened the summit, but leaders were long gone by the time police declared the gathering illegal and fired canisters of pepper spray and smoke.

Civil liberties groups decried what they called a heavy-handed and unwarranted police response to the Thursday protests. They complained that riot officers focused on largely peaceful, if unsanctioned, demonstrations when they should have been paying more attention to small groups of vandals that smashed windows of city businesses.

Not all of the protesters call themselves "anarchists." When the media uses terms like anarchists, is the intent to effectively excuse any police action against them? Who are these "anarchists?" And what are the issues?

This is from Organize Pittsburgh. Maybe these folks have a point.

Pittsburghers didn’t ask the G20 to come here, but it is our intention that the worldview the summit represents will die here.

This September 22-25 Pittsburgh will host the next summit of the G20, a group of finance ministers and central bank governors from the world’s largest economies who meet twice yearly to discuss and coordinate the international financial system. Around 1,500 delegates, including heads of state, will be here along with more than 2,000 members of the media, and thousands of police and security agents tasked with squelching dissent.

This summit, and the predecessor meetings this past April in London, occurs on the heels of the worldwide financial meltdown that has been severely impacting hundreds of millions around the world. Since its inception, the G20 has been a tool used to promote a world vision based on the ability of capital to move as it pleases, at the expense of labor, human rights and the environment.

Now that the system these leaders have forced on the world is in crisis they continue to operate as if they have the answer. We know that they do not. To save countries, they propose we turn to institutions such as the International Monetary Fund (IMF), an entity that has historically imposed murderous structural adjustment programs on the world’s poor.

G20 summits, alongside other meetings of institutions such as the World Bank, the IMF and the World Trade Organization, have rightfully been targeted by hundreds of thousands of people around the world because they represent a global vision based on war-making, social and economic injustice, and corporate greed. Pittsburgh will take its place alongside people around the world who have protested and resisted such gatherings in their hometowns.

What do you think? Here is the sound cannon: