The Stonewalling of Peak Oil 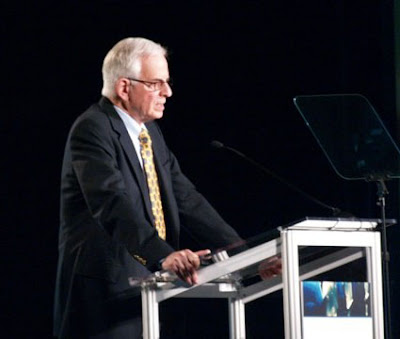 Following is an interview with Robert Hirsch,author of a seminal report--Peaking of World Oil Production: Impacts, Mitigation & Risk Management—written for the US Dept. of Energy's National Energy Technology Laboratory (DOE, NETL) and released in early 2005.

You know we are in trouble when people sense something is wrong but our leaders avoid talking about it. Here are some excerpts of this Sept. 9, 2009 interview:

I learned about peak oil after I got out of the oil industry, because there was essentially no talk about it when I was involved. In the early 2000s I did a study for the DOE dealing with long range energy R&D planning. One of the six drivers that I came up with was peak oil; I had never really thought about it prior to that. It's kind of a “tar baby”; once you get your hands into it, you can't get your hands off of it. When oil production goes into decline, it's going to be a defining issue for humanity. So I've been involved for six or seven years in analyzing oil peaking and its mitigation.

It is refreshing to hear someone speak the truth even when the truth is very hard to hear:

The peak oil story is definitely a bad news story. There's just no way to sugar-coat it, other than maybe to do what I've done on occasion and that is to say that by 2050 we'll have it right and we will have come through the peak oil recession—quite probably a very deep recession. At some point we'll come out of this because we're human beings, and we just don't give up. And I have faith in people ultimately. But it's a bad news story and anybody's who's going to stand up and talk about the bad news story and is in a position of responsibility in the government needs to then follow immediately and say “here's what we're going to do about it,” and no one seems prepared to do that.

Peak oil is a bigger issue than health care, than federal budget deficits, and so forth. We're talking about something that, to take a middle of the road position—not the Armageddon extreme and not the la-la optimism of some people—is going to be extremely damaging to the U.S. and world economies for a very long period of time. There are no quick fixes.

The government is not helping.

If I was involved in the government at a high level, I would argue very strongly to the president that he needs to take national and international leadership on the problem. He should do some homework to be sure that he hears what the issues are -- do it quietly -- and then stand up and say, “world and country, we've got a very serious problem and here is what my administration is going to do about it.” That's what I would argue for because somebody has to stand up and say the emperor has no clothes. That's going to be very difficult because people don't like to hear bad news, and this is terrible news, and as it sinks in, markets will drop and there will be an immediate recessionary reaction, because people will realize that this is such a horrendous problem that having a positive on employment and the economy is just simply unrealistic.

....I've tried to think outside the box in terms of how we get the message out and get people's attention. I found nothing that I could do that I'm not already doing, except write a book, which we've just started. But other people have other thoughts, opportunities, and connections, so I would urge them to conceive of ways to rationally and reasonably get more decision-makers involved in 1) recognizing the problem and 2) helping to elevate it to the highest levels of government, so serious action can begin.

Doing my little part to get the word out.