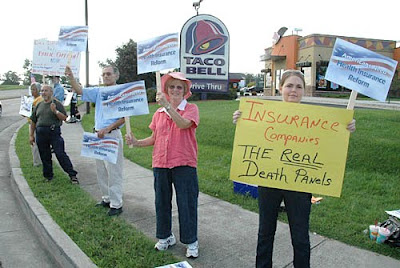 I know these folks!


Between 35 and 40 of us held our signs, smiled and waved at passersby during afternoon rush hour Tuesday. We were on the busiest intersection in Northeast Tennessee (West Market and State of Franklin) just north of the Johnson City Medical Center.

It is about health care reform. We need it now.

The motorists for the most part seemed to agree. I received about three thumbs down and one "bullshit" but other than that friendly waves honks and nods from countless others. As more pics and stories come available I will post or link to them.

Beth from the Tennessee Health Care Campaign was there and took a few pics.

(By the way, if you happen to be arguing with your brother-in-law over health care, you might check out this helpful page for information and ways to communicate it).

The Johnson City Press (thank you!) stopped by, took the above photo and posted this story:

Motorists headed home from work had more than street signs to read at the intersection of North State of Franklin Road and West Market Street Tuesday.

“Our main message today is that if the insurance companies win, the rest of us lose,” said Janet Meek, coordinator for the East Tennessee Democrat Resource Center. “Insurance companies are spending $1.4 million a day advertising against health care reform. They have contributed more to (Congress) this year than they ever have in the same time period in the past.”

“Hearing all those honks, I think so far we’re doing pretty good,” said Meek. “I hope that it’s empowering, in a way, for them to see that what they’ve been thinking is what other people have been thinking also.”

Meek has been watching the health care debate closely this year and has recently seen what she considers a heartening change in the public opinion.

“In August, when I went to town hall meetings and stayed up with the news, I was feeling very overwhelmed by all of the effort being put into disseminating ... wrong information,” she said. “I was discouraged by the people who seemed to feel like they were hearing the truth when I knew they weren’t.

“But since Obama gave his speech to Congress, I’ve seen a whole different attitude. I think people just needed to be reassured that it’s not about hurting health care; it’s about making health care accessible.” (Read the whole story)