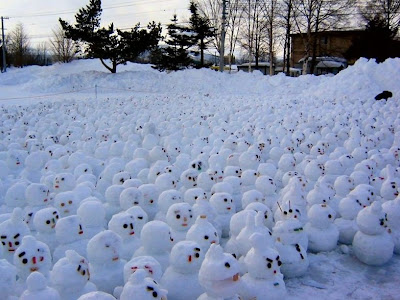 Will someone please, listen to the snowpeople?

Meanwhile Obama might earn his Nobel Prize if he acts decisively on climate change:

President Barack Obama, who accepted a Nobel Prize in Oslo yesterday, will have a chance to earn it at climate talks in Copenhagen next week, environmental advocates said.

“We urge President Obama to act in the spirit of this most prestigious award and move boldly to stop catastrophic climate change,” Kumi Naidoo, executive director of Greenpeace International, said in a written statement.

Obama, during his speech accepting the award, said there is “little scientific dispute” about the dangers of global warming and called on countries to work together to deal with the challenge. (Read More)