Our Tree-Hugging Church Makes the News!


Thanks to reporter, Madison Matthews, and the Johnson City Press for a nice article about our church in today's Faith Section. Read it here or here. 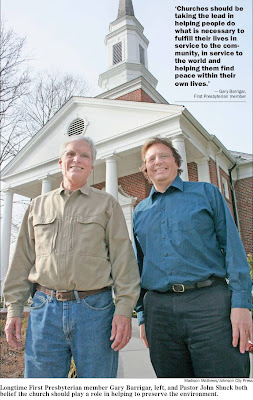 First Presbyterian Church in Elizabethton is no different.

Billed as “a progressive Christian community,” First Presbyterian has long had a hand in embracing ideas that might seem unusual for a congregation located in a typically conservative Christian environment.

Whether it’s embracing ideas like evolution, being an open and affirming congregation to gays and lesbians or doing their part in being stewards of the environment, First Presbyterian is bringing awareness to things it considers to be valuable to the Christian tradition, according to Pastor John Shuck.

“Religion often does reinforce the status quo and power structures that are often destructive. It is important to have — from a church perspective, from a faith perspective — one that advocates for equality and sustainability,” he said.

While the church does a lot of work in the area of social activism, its dedication to taking care of the environment is one of its longest-standing areas of work.

Gary Barrigar has been a member of First Presbyterian for 22 years. He remembers the church’s being heavily involved in environmental issues even before he joined the congregation.

Barrigar said he sees the church’s dedication to taking care of the earth as being just as important to its Christian mission as anything else they do.

“The earth is an integral part of our experience and we view ourselves as one part of the earth as well. We can’t live on this planet without affecting our environment,” he said.

The issue of mountaintop removal mining isn’t as prevalent in Tennessee as it is in West Virginia and Kentucky, however, Shuck said that doesn’t mean it’s any less a destructive force to the environment.

Shuck’s first experience with mountaintop removal mining was in 2005 when he assumed the role of pastor of First Presbyterian. He said a church member took him on an airplane ride over the mountains in Wise County, Va.

“Seeing that effect on the lives of the people who live there and the futility of it, frankly, that has been an issue that has inspired a lot of us to say this is an issue that really is a devastating piece of environmental degradation,” he said.

Barrigar said the mountains in East Tennessee are just as precious as those in the surrounding areas of the Appalachians. In fact, the church has had long association with naturalist efforts on Roan Mountain, dating back at least 40 or 50 years.

“We have a connection with mountains here, and nature. That probably became where our environmental activism came from,” he said.

When Shuck first took the job as pastor and moved to the area from Montana, he said, it was the congregation’s commitment to environmental stewardship that was one of the main selling points.

“I think of our life here on earth as an important one. Earth is our home and we need to preserve it. I grew up in a tradition that sometimes thought the important thing is heaven after we die. I tend to think that’s important, but that’ll take care of itself,” he said. “I think we have to take care of earth and focus our spiritual and community energies toward preserving earth for ourselves, our descendants and all living things.”

First Presbyterian participates in a number of environmental activities, including being a member of the Green Interfaith Network Inc. organization, as well as hosting a variety of retreats and workshops highlighting the importance of the issue.

The church’s embrace of environmentalism and other social justices are an extension of a long history of social activism within the Presbyterian denomination.

Much of the work First Presbyterian does in highlighting these issues stems from its peacemaking committee, which acts as a way for the congregation to connect with peacemaking efforts within the community .

Shuck said peacemaking committees are nothing new to Presbyterians, and First Presbyterian was one of the first churches to adopt its own committee about 20 years ago.

Both Shuck and Barrigar agreed there’s more to these issues than just being secular or non-secular. Instead, they relate to the spiritual aspect of who we are as people.

“Churches should be taking the lead in helping people do what is necessary to fulfill their lives in service to the community, in service to the world and helping them find peace within their own lives,” Barrigar said.

Shuck said he was brought in to take the groundwork that had been laid and put First Presbyterian on the map in terms of its social activism. And Shuck thinks that’s been a good thing in getting people involved with the church and allowing that to become a source of inspiration for people to get out and do good things.

“I think some people have a negative concept of the church. A little self-centered, but we are a congregation that really wants to care about the earth and people’s concerns and very good things. I think that’s very positive. We may have a congregation that has a variety of beliefs, but they have a common thing in trying to do good,” he said.
Posted by John Shuck at 3/05/2011 11:28:00 AM