This is in today's Johnson City Press:

Newly converted Muslim Angie Travers has been asked what she can possibly get out of a religion espousing violence.

Islam has nothing to do with violence, she must explain. Most people only see the violence attributed to Muslims on the news and not how the majority of the Islamic community live and worship.

But it is only fair to learn about Islam from a Muslim, said Muslim Community of Northeast Tennessee committee member Ihab AbuZayda. And on Thursday and Friday, will be the chance to do that as MCNET hosts “Common Word Between Us: Islam in America.” 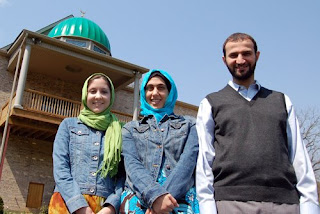 The event will be held at East Tennessee State University’s Rogers Stout Hall, room 102, on Thursday at 6 p.m., and Friday at the newly built Islamic center at 3010 Antioch Road at 6 p.m.

Speaking will be Yusha Evans, a former Christian youth minister who converted to Islam several years ago. Ihab and his wife, Deena, said Evans’ testimony should make it easier for non-Muslim guests at the event to learn about Islam.

MCNET held a similar event this past November called “Bridge to Faith.” It was similar in concept, but different in the topics discussed. Travers said she found it hard to find a seat at those events because they were so popular.

“Well it was very successful, actually,” Deena said of the November event. “And we had a lot of people from various communities come.”

Listeners traveled up to two hours for November’s lectures. And that is encouraging, Deena said, because Islam is a rapidly growing faith.

“This is definitely the opportunity for everybody to get educated on that, to break those misconceptions and misunderstandings.”

The center on Antioch Road has been there just more than one year. MCNET serves Muslims in the entire Northeast Tennessee/Southwest Virginia area. Ihab said chances are good that most people know a Muslim.

“And there are Muslims many people would interact with on a daily basis, but they do not know they’re Muslims.”

Deena said everyone is invited not only to the program, but to the Islamic center anytime.

“It doesn’t matter who you are, where you’re from,” she said. “You’re always welcome.”

I hope many folks in the Tri-Cities will take this opportunity to meet our Muslim friends. Do check out the blog I created for our congregation to be acquainted with the Qur'an.