Here is a report and some pics by PFLAGers Stacey and Beth who attended the National Equality March in Washington D.C. 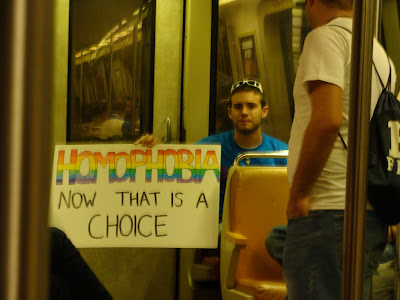 The fun began on the Metro just prior to noon on Sunday, the 11th…where anyone wearing a rainbow or a “Hello Kitty” sticker was clearly going to the same place…the corner of 15th and I Streets. People looked out for each other that day…like when a large group was on the wrong Metro…the yellow line instead of orange…someone in the crowd yelled “If you’re gay, get off now!!!” We got off…soon found the orange line…and made it to the crowd. 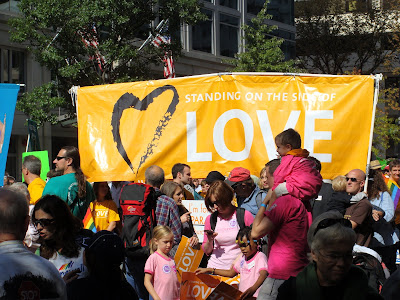 Joining the hundreds of thousands of people also gathered at the same corner of 15th and I streets, one might expect to be filled with anxiety! But quite the opposite, it felt open and calming and a wonderful blending of energy with these people all with the same focus. 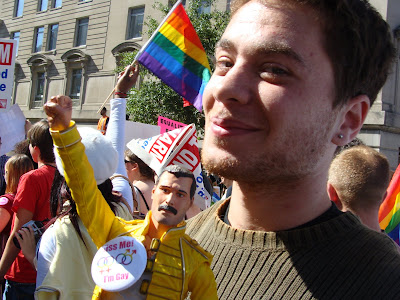 It is difficult to put into words…suffice to say that the beauty that radiated from each individual person in that march was exquisite. 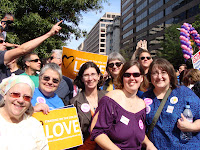 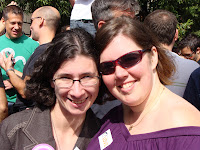 Also striking was what wasn’t present at the march. Unlike what one might expect with a wonderfully typical Pride Parade – a variety of scantily clad men and women, drag queens, flamboyant and outrageous costumes, etc. 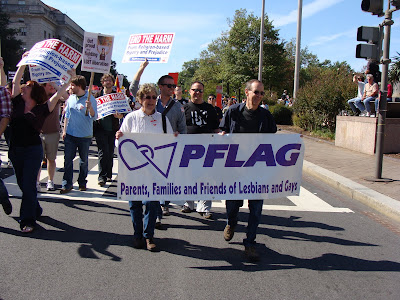 – it was overwhelmingly everyday people…coming together with their friends, loved ones, families, and perfect strangers to make a difference. 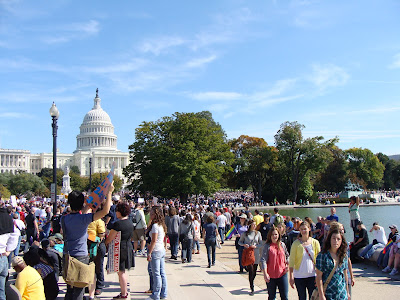 Estimates give 200,000 as the number of people, but it felt like a million on the ground making their way the 2.33 miles from I to H Streets, on to Pennsylvania Avenue, past the White House, to the Capitol building. It felt like a million people in part because of the time it took for the march to begin. It started at noon, and from where we stood toward the back of the crowd marching did not begin until after 1:30pm. Once we made it to the destination of the Capitol lawn, there still were seven blocks of marchers behind us. 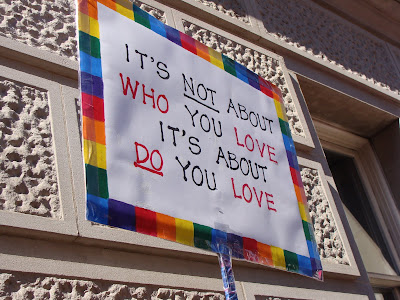 Once the march concluded on the Capitol lawn, an equality rally was held, with a host of speakers including Matthew Shepherd’s mother, Cynthia Nixon, Cleve Jones, among others. 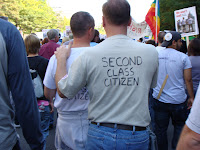 Dan Choi spoke of the need for repeal of Don’t Ask, Don’t Tell. He emphatically repeated three times, getting louder with each time, “I Will Tell” “I Will Tell” “I Will Tell”. It was so inspiring to hear these words from him, knowing what he has been through. He had such conviction in his voice…and it was urging the crowd to join with him in telling. 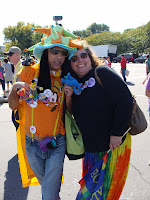 An 18 year old young man … .
One of two that received an award…
Could hear the remorse in his voice - remorse for not responding two years ago the way he would have liked to an incident in which a gay friend was the focus of verbal attack (belittling, humiliating). And so now he is doing what he can to lead a movement of young straight allies to work for the cause… It was moving to hear him, because of his conviction to make a difference but more because of his youth…knowing he is so passionate about this cause…it just felt like he would in fact make a difference…and that he would be in this movement and politics for years to come.