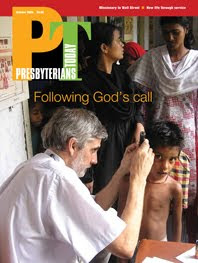 A couple of my peeps pointed out that my picture is in this month's Presbyterians Today. It is in an article by Jody Harrington.

She writes about various bloggers and their opinions about the decline in membership in our denomination.

Here is her article.

Here is the article of mine to which she linked. 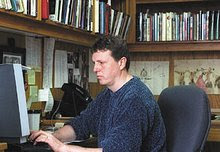 In the print edition, they included a picture of me. My peeps didn't recognize me at first.

This was BH (Before Hair).


This picture was taken a while ago when I was pastor at First Presbyterian in Billings, Montana. It was originally published in the Billings Gazette in response to the then upcoming invasion of Iraq.

A number of us ministers signed a statement against the invasion. My then presbytery, Yellowstone, even approved a similar resolution:

As members of the Presbytery of Yellowstone, we believe our faith dictates that we voice strong opposition to a pre-emptive strike by the United States against Iraq.

While many of us hold that a state is justified in using force in certain situations, we believe that a military strike by the United States against Iraq at this time is not morally justified.

An attack against Iraq would lead to the deaths of thousands of innocent people, including children. It would further destabilize the entire Middle East. We cannot afford to increase tensions between the West and the Arab world, or escalate the spiral of violence around the globe.

Peaceful alternatives to war are not flashy or terribly exciting, but war will not lead the United States nor the world to the security we seek. Peacemaking is hard work, but the way of peace is the narrow road that leads to life.

Therefore, be it resolved that the Presbytery of Yellowstone joins other governing bodies within the Presbyterian Church (USA) and our ecumenical partners in urging the President of the United States to exercise restraint and to work with the United Nations toward a peaceful resolution of this crisis.

This photo made me realize how long it has been since this insanity began. It also made me think how quaint are our concerns. We have been fighting two wars going on eight years in Afghanistan and seven in Iraq, and I finally get my picture in the denomination's magazine because of my opinions on church membership loss.

The latest issue of Newsweek puts these wars in perspective:

Iraq has now outlasted World War II, while in March Afghanistan will edge out Vietnam as the longest American war ever. 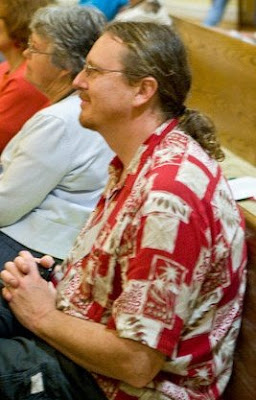 My hair will get a whole lot longer before this is done.