The Way of Wisdom--A Sermon

The Way of Wisdom
John Shuck

First Presbyterian Church
Elizabethton, Tennessee
January 3rd, 2010
Sirach 24:1-22
John 1:1-18
Over the holiday our family saw the film, Avatar. James Cameron’s blockbuster has grossed over $800 million worldwide, so he doesn’t need my promotion. But it is a remarkable film.

It is set 150 years into the future. Humans (specifically, Americans) have landed on another planet, Pandora. We have a military outpost there and there is a desire for a valuable mineral on this planet, some kind of energy source in the ground. The problem is that on the surface is a forest and people. People of some kind. They are called the Navi and they are nine feet tall and blue with tails. They are like hunter-gatherer forest people with bows and arrows. The forest is lush and beautiful.

The Earthlings are there to secure the minerals. The military is in service to the corporation who wants this valuable commodity. They will take it either by force or negotiation. Also there is a scientific group to study the Navi and their ecosystem. They have been able through technology to take the DNA from the Navi and create Navi bodies. Then through this machine a human can be the brain for the Navi body. These bodies are called avatars. If you play a game on the internet or enter a discussion group you select an avatar, some kind of image, to represent you.

In this case the avatar is a real being. This way the scientists can interact with the Navi. The main character through his avatar is to learn about the Navi. The plan is to get them to move so the mineral can be mined or failing that, to find their weakness so they can be forced out.

The conflict within the story is that this main character comes to develop a sense of compassion and identity with the Navi. Will he do his duty to his Earthlings or will he discover a new purpose and a new duty?

I haven’t given anything away. You can get that from watching the previews.

The reason I take up sermon time for this film is to point out one of its symbols. The word avatar comes from Hinduism. It refers to a deity being manifest in human form. In the Bhagavad Gita, what we are going to be reading in 2010, Krishna is the avatar of Vishnu. In human form, Krishna has the consciousness of God.

In the Gospel of John, Jesus is similar. He is the avatar of divine wisdom.

And the word became flesh and dwelt among us. 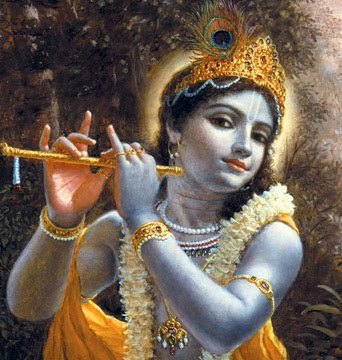 The avatar in the Bhagavad Gita is Krishna and he comes to Arjuna the warrior as a blue man. The iconography featuring Krishna has him as a human and his color is blue. Whether a child or an adult when Krishna is depicted in human form he is blue.


Why is he blue?
Why are the Navi, the good guys in the film, blue?
What does it mean for the Earthling, the film’s hero, to become a blue Navi or a blue man?

James Cameron’s film is a sermon. It is an invitation to us to become the blue man or the blue woman in our time. It is set in the future but it is about us.

The blue man is an archetype. Not only is Krishna blue, but Shiva has a blue throat. Shiva earned his blue throat by drinking up the poison from the water. Doing so saved humanity while it turned his throat blue.

Matthew Fox in his book, The Hidden Spirituality of Men: Ten Metaphors to Awaken the Sacred Masculine includes the Blue Man as one of the ten metaphors.

Fox begins this chapter on the Blue Man by recounting visions of two mystics, Swami Muktananda and Hildegaard of Bingen.

He becomes all things and is yet unique. He gives Him strength to all created things. Like a mother He protects and sustains them and then gathers them all into Himself. He is the supreme light of all lights; all lights take their brightness from Him. There is no darkness about Him. p. 154

Christian mystic, Hildegarde also had a vision of the blue man. For her the blue light became the Christ whose vision she painted as the man of sapphire blue. For her the blue Christ is the compassion and love of God. She writes:

The compassion of the grace of God will make humans light up like the sun. p. 155 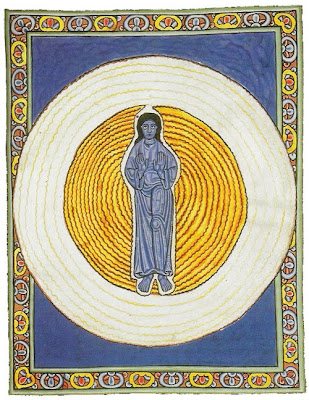 In her painting of the Blue Christ, his arms are extending outward, which is the gesture for compassion, the heart of compassion put to work in our hands.

Blue is the color of compassion, peace, and healing.

I didn’t know this at the time, but I wanted my study painted blue. I am glad I did. I must have unconsciously intuited the blue of healing, peace, and compassion. 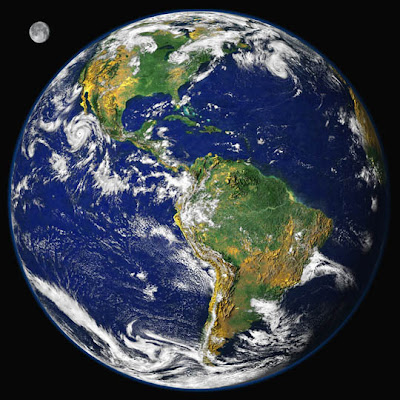 
The blue man reminds us of our primordial womb. The Blue person, as Hildegaard said shows us

“the maternal love of the embracing god.”

Mary, the mother of Christ, a figure of compassion and courage, is depicted in artwork with a blue headcovering.

I mentioned already that Krishna is blue. I was curious as to why. There is no exact answer to these things. I did a quick internet search, and I found this on a website entitled Indian Divinity. I thought this explanation was helpful:

In Hinduism, persons with a depth a character and the capacity to defeat evil are blue-skinned. The creator has given the maximum of blue to nature (ie. the sky, oceans, rivers, and lakes) the deity who has the qualities of bravery and determination the ability to deal with difficult situations of stable mind and depth of character is represented as blue colored. Lord Krishna spent his life protecting humanity and destroying evil, hence he is colored blue.

I don’t know. Another website said he was blue because he ate too many sweets. I like the first explanation better.

Muktananda wrote this about his vision of the blue person:

Every day my conviction became stronger: ‘He is truly my inner Self whose light is spread throughout the entire universe.’ Although I could not see it directly, I saw my inner Self as the Blue Person….I was gaining the realization that the Blue One was my own self, the One who lives within all, pervades the entire universe and sets it in motion, who is One-without-a-second, nondual and undifferentiated, and yet is always at play, becoming many from one and one from many. He is Shri Krishna, the eternal blue of Consciousness. p. 158

If you see the movie Avatar, think of the Blue Person. What it means to become the Blue Person, the compassion, creativity, courage, and connection with all things including consciousness. All of that is in the film. James Cameron did his homework in that respect.

Matthew Fox concludes his chapter on the Blue Man this way:

The Blue Man represents the expanded consciousness and the creative compassion we are all capable of. He is an artist at life, recognizing the beauty and justice and creating it. The purpose of the Blue Man is to empower our hands so that real compassion takes place, the real work of the Divine in our lives. The Blue Man helps us to overcome our fear of death and to let go of our fear-inspired frenzy. Creativity can convert anger and moral outrage into appropriate expressions of protest, so that we build and not simply tear down. …the Blue Man has tasted the divine in the self and in all things and returns for more, returns to assist the healing that Divinity requires of us. When we become the Blue Man, we become the compassionate hands of God putting into practice our compassionate hearts. Pp. 170-1

Today we are honoring the incarnation of Jesus. He is the avatar of divine wisdom, the dabhar or word of God. Wisdom is playful and creative and filled with images. The Wisdom Woman, the Divine Sophia, splashes onto the scene in Sirach:

Come to me , you who desire me,
And eat your fill of my fruits.
For the memory of me is sweeter than honey,
And the possession of me sweeter than the honeycomb.
Those who eat of me will hunger for more,
And those who drink of me will thirst for more. 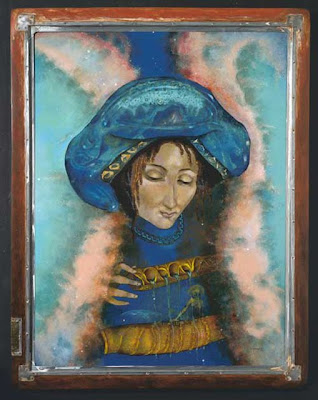 This Divine, playful, powerful, compassionate, Wisdom, the Wisdom Woman, Sophia is incarnated in Jesus! The historical person of Jesus was a sage, an artist, a teller of parables and stories. The tradition picked up on that and made him not only a teacher of wisdom but the embodiment of Wisdom as well.


Jesus and Krishna both symbolize the incarnation of wisdom, creativity, and compassionate action on behalf of Earth and its people. They represent the Blue Person. We need more than ever to discover the Blue Person within each of us.

In James Cameron’s film, Avatar, the Earthlings are smart and clever. They have incredible technology. The weapons are impressive. Traveling to another planet takes some creativity. But they aren’t very wise. They don’t understand the value of a tree and the ecosystems that connect trees with all Life dependent upon it and each other.

Our hero at one point in the movie, says of the Earthlings.

“They destroyed their mother.”

Cameron’s film is not about the future. Nor is it about some place else. It is about the present in this place. It is a film of warning. It is also an invitation to become wise as well as clever. To become compassionate as well as creative. I am hoping his film speaks to those who see it, inspiring in them reflection about our place on Earth at this time. I don't begrudge James Cameron grossing 800 million if his film helps change our consciousness.

One of the ways we might access our own creativity, the creativity of the universe is to take the time for meditation or reflection. Take the time to read, write, paint, draw, walk in nature, and to sit and be.

More than all, love the universe.
Love Earth.
Love yourself.
Love others.
Love the dirt.
Love your flesh.
As Sophia/Wisdom loves all of creation,
fall in love with life.

When we do that we will not help but to discover our compassion and become artists, prophets and healers.
Posted by John Shuck at 1/03/2010 09:49:00 AM