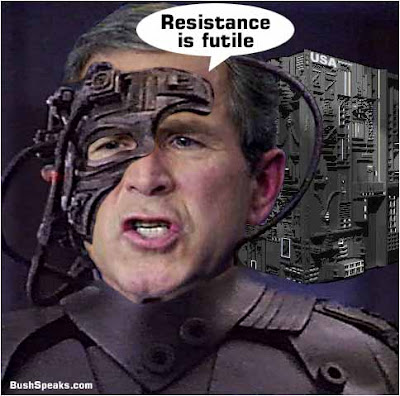 Our hero, controlled by the Borg
Here is a final plug for the book study on Marcus Borg's latest, Jesus: Uncovering the Life, Teachings and Relevance of a Religious Revolutionary.

The study will begin this Thursday in Martin Hall from 10:30 until noon. We will meet every Thursday until March 29th, skipping March 1st when I will be in Miami for Westar's Spring Meeting. Come join us. Bring a friend.

While Borg's book will be the focus text, I will introduce other material regarding the historical Jesus quest. Any serious quester will at some point need to read Albert Schweitzer's Quest of the Historical Jesus. Schweitzer's book is a century old, yet the church as a whole has not caught up with him. 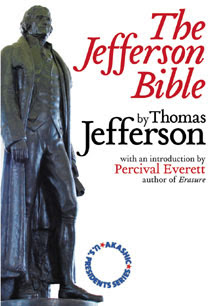 Folks may be surprised to find a breadth of views regarding the historical Jesus. Contrary to popular opinion, it didn't start with the Jesus Seminar casting their red, pink, gray and black beads. Thomas Jefferson when he had time on his hands took scissors to the gospels in search of the historical Jesus. If only contemporary presidents could be so serious in regards to scholarship and faith!


Early Christian Writings has a listing of some Historical Jesus Theories along a spectrum from "Jesus the Myth" to "Jesus the Savior."

Whether or not one finds the "Jesus the Sage" of the Jesus Seminar persuasive, you have to give them (and Bob Funk) credit for nudging scholars to come clean with their views and to publish these views in langauge that non-specialists can read.

I am pleased (an understatement) that scholars such as James Tabor, April DeConick, and James Crossley are a-blogging. I particularly enjoyed this piece from Professor DeConick, The Second Principle of Historical Hermeneutics in which she writes:

"...in all our texts we must distinguish between history and theological interpretation of events, between fact and fiction. This is the second principle of historical hermeneutics.

If a scholar argues that he or she can prove from the texts that Jesus actually rose from the dead or performed miracles or was born from a virgin, we need to think twice. Is this fact or is this theology wanting to be history? If we have any questions about these types of issues, simply change the god, or change the man. In other words, if a scholar of Abraham Lincoln were to write that good old Abe rose from the dead because a letter from a soldier reported that he saw Lincoln rise from the dead, well, what would we think? What we would think if Buddhist scholars told us that the Buddha was born from a virgin, and this was historically true? Why when it comes to Jesus are we willing to suspend what we know to be true about our world? As soon as we do this, we become apologists and theologians. We leave history behind."

Praise the Lord. This was my beef when I wrote an essay for the Liturgy and Literacy Seminar in the Fall of 2005. I think the distinction between history and theology should take place in a worship setting as well. I wrote

"I have endured the preaching of even seminary professors who know the difference between the Christ of mythology and the Jesus of history and yet do not come clean in their preaching. I believe this is intellectually dishonest and does a disservice to Jesus himself. If there ever was a guy who actually said and did some of the things historical scholars think he might have said and done, we owe it to him not to turn him into a god, or at least to be honest about it when we do."

Dr. DeConick allows, of course, a place for theology. She refers to Marcus Borg as an example of a scholar who takes history seriously and allows room for texts to be understood metaphorically. She writes...

Marcus Borg's book, Reading the Bible Again for the First Time: Taking the Bible Seriously but Not Literally (2001), is one that I have found useful in my Introduction to the New Testament course because it takes seriously the historical method and its results, while providing Christians with a metaphorical way to interpret scriptures that does not compromise the results of the historical method. Almost. In Borg's discussion of miracles (he prefers the word "spectacular") - whether a particular historical event lies behind stories that "go beyond what we commonly think to be possible" - is he really applying an uncompromising historical method? Or is there slippage?

Borg writes:
"I think that Jesus really did perform paranormal healings and that they cannot simply be explained in psychosomatic terms. I am even willing to consider that spectacular phenomena such as levitation perhaps happen. But do virgin births, multiplying loaves and fish, and changing water into wine ever happen anywhere? If I became persuaded that they do, then I would entertain the possibility that the stories about Jesus reporting such events also contain history remembered. But what I cannot do as a historian is to say that Jesus could do such things even though nobody else has ever been able to" (page 47).

Are stories like Jesus' resurrection story useful to a historian? Absolutely. What it tells me is that some of Jesus' followers had visions of Jesus after his death, a psychological phenomenon not unusual. I had vivid dreams, what I would call "visions," of my mother after she died, all suggesting that she was really alive but hidden away by the doctors. It took a couple of years for this to subside. In the ancient Jewish culture, visions of the dead could be interpreted in a couple of ways. The person has seen the deceased "spirit" or "ghost," an interpretation that some of Jesus' followers made of their visions of Jesus according to Luke 24:37. Or the person has witnessed someone's resurrected body, the theological interpretation that became the standard interpretation in the memory of the community. This interpretation was so important that it launched a series of christological questions and formulations, and ultimately led to Jesus becoming God. But how that happened is the subject of another post.

I look forward to it. Now a bee is buzzing in my bonnet. I feel the need to encourage my Jesus Seminar buds to get out among the blooming blogging field. It can only serve to pollenate our discussion. Flowery enough?
Posted by John Shuck at 2/13/2007 03:13:00 PM