Here is an informative article by Roy Hoover on the formation of the New Testament Canon, How the Canon was Formed. It doesn't take long to see that the formation of the canon itself is the result of a historical process. Which means of course, that human beings chose the documents that would be in the canon. If human beings made choices then, what is to stop us from making different choices today? Many scholars and (radical reverends) advocate a New New Testament. This NNT would order the documents from a historical perspective and include all the voices of early Christianity. Early Christian Writings is a good starting point. 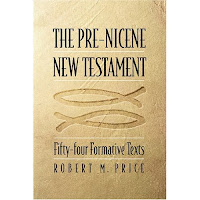 Bob Price has put together the Pre-Nicene New Testament that contains 54 (double your value in comparison to the orthodox brand!) writings from the pre-Nicene period.

Of course there is the Complete Gospels by Robert Miller

and Lost Scriptures by Bart Ehrman that can help you on your quest.


Last year in a sermon Theology is Earth Science I spoke about this and advocated for a Loose-Leaf Bible. The text was saying #3 from the Gospel of Thomas. Here is how I began the sermon:


New Testament scholar, Charles Hedrick, has suggested that our Scripture ought to be a loose-leaf notebook. Add some pages; remove some. Let people decide on their own those texts that are authoritative and those that are not. It would force us to give up our idolatry of the Bible in which we see it as some kind of magical book that came down from heaven on a golden platter. It would keep us from putting a halo around bad texts. It would keep us from thinking and declaring and acting as though we possess the truth because we have the right book.


The loose-leaf scripture makes it impossible to justify one person’s oppression of another because of what “the Bible says”. If someone tells you that you cannot receive communion, or can’t speak in church, or can’t be a minister, or can’t go to heaven, or have to cry and weep and repent all day, because of some passage in the Bible, then, you can pull out your three ring binder and say, “Well, gee, I have already removed that page and I have replaced it with up to date information!”


No one could appeal to the authority of scripture because in the end each person’s three-ring binder contains or potentially could contain different scriptures. What would this mean? This would mean that every argument, opinion, proposition or plan of action would have to stand on its own merit.


So, for example, if you wanted to convince the community that women should have their heads covered when they are in worship, you could appeal to I Corinthians chapter 11. But others in the community may have already removed that chapter from their loose-leaf notebook. Your appeal to divine revelation and its authority will have little effect. If you want to convince people of your proposition, you will have to convince them that it is reasonable. If you want to convince the women of the church that they need to have their heads covered, you will need to do better than say, “The Bible says”. In a loose-leaf Bible church, your argument will stand or fall on its own. (Read More)

I was speaking somewhat metaphorically, but not long after that sermon someone in the church showed me her own Loose-Leaf Bible filled with quotes, poetry, and other writings that she had collected over the years that had helped her create life's meaning. I thought to myself (to quote Jesus) now there is a person who is not far from the kingdom of God.
Posted by John Shuck at 2/23/2007 06:55:00 AM