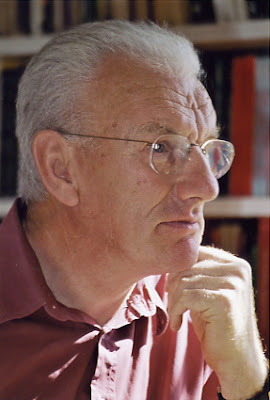 I am ready for topic three in my theology for the 21st century. To wit, I am going stop here with God and check back in on her later. But before taking leave of God I wish to introduce radical theologian, Don Cupitt.

In the tradition of the French Post-modernists a la Jacques Derrida, Cupitt is a non-realist. Here is a helpful description:

Today, a realist is the sort of person who, when his ship crosses the Equator, looks overboard, expecting to see a big black line across the ocean. Realism tries to turn cultural fictions into objective facts. A non-realist sees the whole system of lines of latitude and longitude as a valuable fiction, imposed upon the Earth by us, that helps us to define locations and to find our way around. For a realist Truth exists ready-made out there; for a non-realist we are the only makers of truth, and truth is only the current consensus.

In brief, we don't know and we cannot know THE world, absolutely. We know only OUR world, a world shaped by our ideas, seen from our perspective, and built by us with our needs in view. Such is Cupitt's non-realist philosophy. It implies, by the way, that we have no privileged knowledge of ourselves either, hence Cupitt's phrase "Empty radical humanism". It means "We alone improvise our knowledge about everything - including even ourselves". There is no absolute or perspectiveless vision of the world: the best we can have is a slowly-evolving human consensus.

In religion, the move to non-realism implies the recognition that all religious and ethical ideas are human, with a human history. We give up the old metaphysical and cosmological way of understanding religious belief, and translate dogma into spirituality. We understand all religious doctrines in practical terms, as guiding myths to live by, in the way that Kant, Kierkegaard and Bultmann began to map out. We abandon ideas of objective and eternal truth, and instead see all truth as a human improvisation. We should give up all ideas of a heavenly or supernatural world-beyond. Yet, despite our seeming scepticism, we insist that non-realist religion can work very well as religion, and can deliver (a form of) eternal happiness. Cupitt sees his religion of ordinary human life as the "Kingdom theology" that historic Christianity always knew it must eventually move to, after the end of the age of the Church and the arrival of a religion of immediate commitment to this world and this life only.

If you are intrigued by non-realism and/or the philosophy of Don Cupitt, I recommend one of his books, Reforming Christianity, Way to Happiness, Radical Theology, Life, Life, The Great Questions of Life, or Emptiness and Brightness. It doesn't matter with which you begin. Just pick a title that looks interesting. He has written over 20 books. I have found his approach quite helpful. This is not over your head philosophy. Rather, it is practical life philosophy for those who dare to think that this life is worth living.

You may also be interested in the Sea of Faith Network.