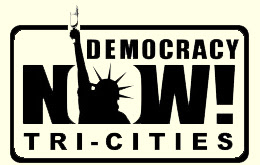 Tomorrow, I am going to preach about the Bible in my series of sermons regarding beliefs to give up in order to grow. I am going to focus on the dogma of divine inspiration of the Bible and the authority that doctrine presupposes. I will speak about the damage that dogma is creating in our nation. We are in danger of losing democracy in this country because this doctrine about the Bible is empowering the right wing in its lust for power and control. We are in danger of giving up our democracy for a theocracy. Don't think it can't happen. It already is happening. Read my last post on the IRD and their goals (purely social and political and based on the Bible as divinely inspired). That is just a small part of a larger well-organized and well-financed effort. Little by little, precinct by precinct, jurisdiction by jurisdiction, the fundamentalist theocrats with Bibles in hand are moving into positions of power.

Last week, Amy Goodman of Democracy Now! interviewed Chris Hedges. I reported on that here. Since then I purchased his book American Fascists: The Christian Right and the War on America and it is a sobering work. Here is a passage regarding the Bible: 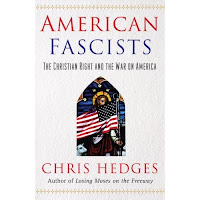 Mainstream Christians can also cherry-pick the Bible to create a Jesus and God who are always loving and compassionate. Such Christians often fail to acknowledge that there are hateful passages in the Bible that give sacred authority to the rage, self-aggrandizement and intolerance of the Christian Right. Church leaders must denounce the biblical passages that champion apocalyptic violence and hateful political creeds. They must do so in the light of other biblical passages that teach a compassion and tolerance, often exemplified in the life of Christ, which stands opposed to bigotry and violence. Until this happens, unil the Christian churches wade into the debate, these biblical passages will be used by bigots and despots to give sacred authority to their calls to subjugate or eradicate the enemies of God. This literature in the biblical canon keeps alive the virus of hatred, whether dormant or active, and the possibility of apocalyptic terror in the name of God. And the steady refusal by churches to challenge the canonical authority of these passages means these churches share some of the blame. "Unless the churches, Protestant and Catholic alike, come together on this, they will continue to make it legitimate to believe in the end as a time when there will be no non-Christians or infidels," theologian Richard Fenn wrote. "Silent complicity with apocalyptic rhetoric soon becomes collusion with plans for religiously inspired genocide." p. 6

A friend of mine reminded me of another good book, The Sins of Scripture: Exposing the Bible's Texts of Hate to Reveal the God of Love by John Shelby Spong. I enjoy reading Spong's work. In fact, I even named my dog, Shelby, for him.

I suggest reading Hedges and Spong. They aren't simply talking about quaint religious ideas. The issue is not the Bible itself or its texts. The issue is the dogma attached to it. You may not know much about the Bible or care about it at all.