Here are some reports from the Johnson City Peace Bus to Washington DC on Saturday. Before I get to those, I want to announce that I plan to participate in The Christian Peace Witness for Iraq on Friday, March 16th. If you would like to attend you need to register as there are limited sites in the National Cathedral. If you wish to attend, register. If you wish to go up as a group, e-mail me, and I will work on getting transportation. We will go up Thursday and come home Saturday. More details to come.

Back to the events of last Saturday, January 27th. 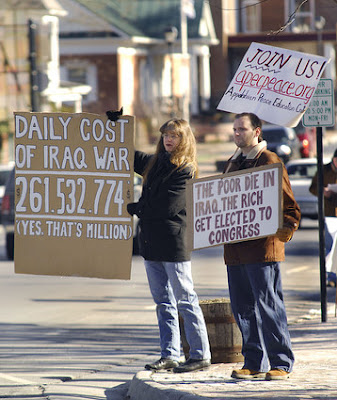 Now to the march in DC. Sandra Garrett wrote a letter to the editor that was published Wednesday in the Johnson City Press, "Anti-War Protest Was Like a Drink From a Fresh Well."

A group of people from Upper East Tennessee went to Washington this past weekend to march in an antiwar protest. Why did we go? To lower morale among the troops in Iraq? To “embolden” the enemy? To relive our hippie past? Did we think we would change the president’s mind? No. We went to drink from the well. To refresh ourselves in the energy of something big and to know we are not entirely alone. We went to take big gulps we could save and bring home with us, so we could keep working. Some of us have been to the well before, though perhaps it’s been 30 years. Others took their first drink from it this weekend, and came away with a new taste in their mouths. It’s always a thrill to help someone discover something new and wonderful, so for me the taste was even sweeter. To those who remind us that our soldiers give themselves so that we can make this trip to the well, we say “Drink deep!” To do otherwise would be to deny their sacrifice. To stay silent and wave a flag while our soldiers choke in the sand serves no one. The enemy is as emboldened by those who would seal the well off as it is by those who drink from it. But the well emboldens us to keep working for an end to this illegal war. We thirst for that end, so we go to the well.
SANDRA GARRETT
Elizabethton

Amanda Finley attended the march from Johnson City and offers her thoughts and some pics. You can view her picture album. I will intersperse some of her pics with her story. I put my own captions on the pics for the purpose of this story. You'll want to see her whole album and read the originals.

I can't tell you all what Saturday meant to me in Washington DC. It was feeling one has to experience to explain. To be surrounded by literally hundreds of thousands of people from every age, walk of life, race, ethnic background, religion, young and old, who all came together for one great cause, and that is to save lives. 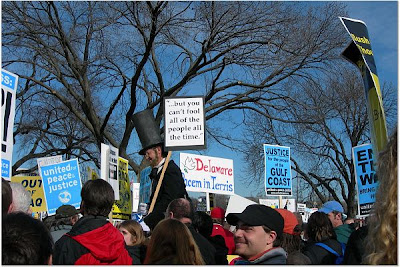 It was simply electrifying. I've been to DC 4 times in the last 6 years, and this one made the top of the trips. I saw no memorials (seen em all), and nobody cared to. That is not why we were there. 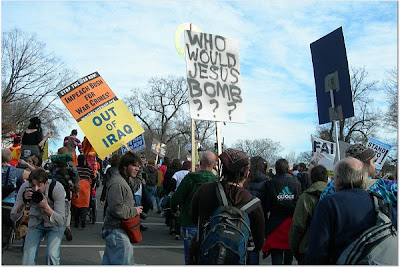 Who Would Jesus Bomb?

We had a mission to accomplish, and that was to show the world that a majority of Americans are sick and tired of the regime that has taken over our government, and it can't go on! Bush and his regime have to be stopped. So many lives have been lost because of him and his administration. 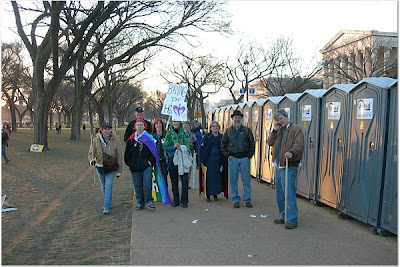 Here are some members of the Johnson City crowd. They are either passing peace to the porta-potties or showing us where we ought to put the President's plan. 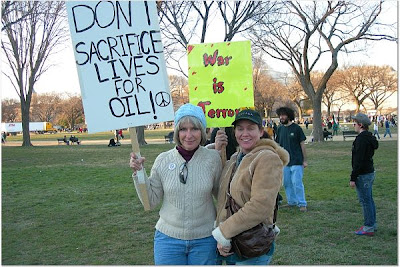 The subways heading into all of DC were crowded full of marchers, all
heading down to the capital. We first went to Tacoma, Maryland where a Presbyterian Church greeted us with a home base for coffee and breakfast. They also were a home base from 2 bus loads from Asheville. After breakfast Saturday morning, we walked to the subway and rode it all the way to the capital, picking up marchers all along the way. It was great! A whole train full of peace lovers!

The speakers started about 11 am, and the crowd grew and grew, until there was standing room only between the Lincoln Memorial and the Washington Monument to the Capital Building. It was packed! We listened to each person speak, and each one only had 5 minutes to speak. There were members of Congress, heads of organizations, even a 12 year girl, father who's son died, and a father who's son refused to go to Iraq and is now being court marshaled, and then came the celebrities. 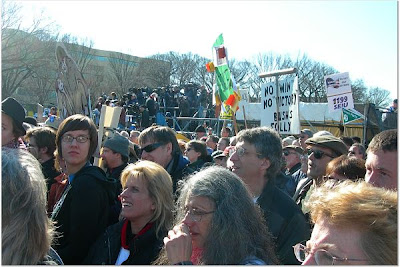 First, Jesse Jackson, then Sean Penn, then Susan Sarandon. That is when I cried. Susan listed all the statistics of the deaths of innocent Iraqi's, women and children, old and young citizens who American soldiers have killed (mostly due to the language barriers at checkpoints and our bombs), or been killed in this bloody civil war Bush has created, American soldiers who have STD and can't get help after they return home, American families who have lost their brothers, sisters, sons, daughters, and fathers and mothers, moms and dads, and for what? I'm not finding any answers!

Then, Jane Fonda spoke, and she gave great credit to the Gold Star Mothers who were given seats on the stage with big posters of their sons or daughters who have been killed in this war. She only spoke for 5 minutes too, although the media has played her up more than anyone else. 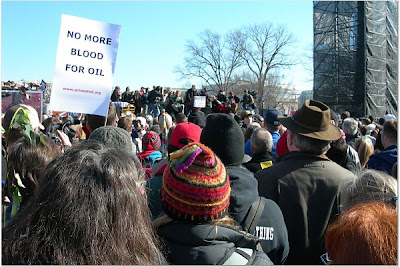 The last to speak was my favorite: Tim Robbins. In case you don't know who he is, he starred in "The Shawshank Redemption". He gave the most awesome speech, starting off with the news that Karl Rove has been summoned to court. The crowds went crazy with joy
when he said that. 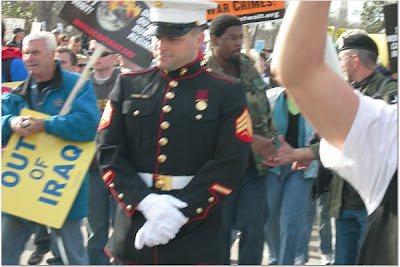 It was so moving. I saw a Marine in his dress uniform, standing there in the middle of everything smiling. Old men in their WW II uniforms, wearing purple hearts, knowing this war we are in today is NOT the war they fought in Europe against Hitler. That was a war that HAD to be fought because we were attacked. This war is like Vietnam. This time, America attacked first. Iraq was NO threat. No WMD's! It was all lie. Bush and Cheney had the country confused with threats of fear and right wing religious agendas!

I've done a good thing by going to DC and showing and exercising my democracy. We have to stop Bush and Cheney from these war crimes. He needs to be impeached, along with Cheney. Please, get on the wagon. Join MoveOn.org, or United for Peace and Justice. 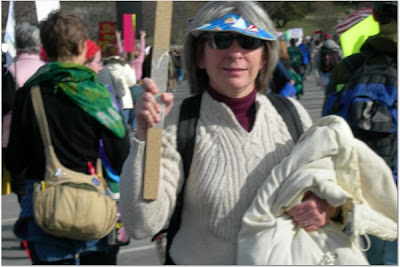 Amanda on the march

Sign the petitions, call your reps in DC. Go to the demonstrations and make a difference! Now! Help save a life! It could be a friend or a family member's life you save.