I Want to Ride My Bicycle! 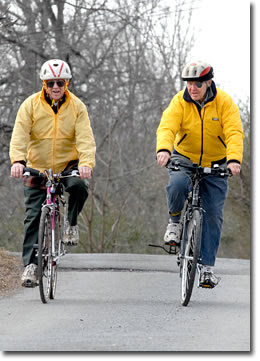 The Johnson City Press captured one of our church members on film today. Frank Knisely is an advocate for riding bikes and creating bike paths in Johnson City. James Brooks wrote a nice article about him and his friend, Tom Dosser.

Architect Frank Knisley is Dosser’s junior at 78, and a heart condition has slowed down his riding somewhat. “That put a governor on what I can do,” he said. He is also a lifetime cyclist who went away from it during school years, but returned to daily commuting in 1957.

“They had an article about me with a photo in the Press-Chronicle because it was such a rare thing, but I notice there’s just about as few bike commuters now as there was then,” he said. “Back then I got more coverage than the death of the pope.”

Knisley keeps riding because of the joy it gives him. “It’s wonderful. I feel so free when I’m out,” he said. “It’s something that transcends ordinary living.”

He and his wife recently bought a pair of Cannondale aluminum bikes. He’s also on the bikeway committee and is lobbying for a bikeway circling Johnson City with connecting lines. The city has marked some bike lanes on Boones Creek Road and other places.

“It’s an uphill pull,” Knisley said. “The city gives us lip service and that’s about it. However there is federal highway money available, and even though that’s about .005 percent it would be enough to cover a bikeway to Jonesborough.”

Knisley rides in all weather by dressing in layers and wearing a helmet. He prefers toe clips to the modern clip-on pedals that require shoes that you cannot walk in. He uses brightly colored strobe lights, and has discovered the comfort bike with its softer saddle and wider tires.

“There are a lot of good 25-mile loops around here that are just about ideal, like Piney Flats and Watauga Flats along the river,” Knisley said. “I like to stress that just because you have a health problem it’s no reason to give up on life. It does hurt that I can’t outdrag the traffic when the light turns green anymore.” Read More