Beginning February 15th, I will lead a study of Marcus Borg's latest book, Jesus: Uncovering the Life, Teachings, and Relevance of a Religious Revolutionary.

Anyone may come! Invite your friends! Read the first chapter, "Jesus Today: Telling His Story" for the first meeting. Marcus Borg has been helpful to many people who wish to integrate scholarship with faith.

Here is the preview from the publisher:

Almost two thousand years after his death, Jesus continues to be front-page news in the United States. Recent polls show that over 84 percent of Americans agree with the statement, "Jesus is the Son of God." From Mel Gibson's The Passion of the Christ to Dan Brown's The DaVinci Code to the mega-selling apocalyptic Left Behind series, we remain haunted by Jesus. 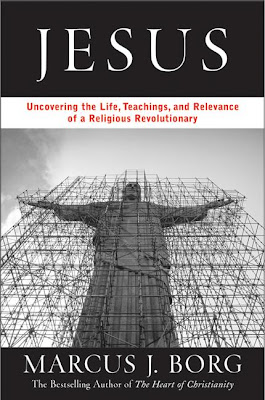 Leading Bible scholar Marcus Borg takes us on an incredible journey to discover who Jesus was, what he taught, and why he still matters today. In the definitive book of his career, Borg argues that how we see Jesus affects how we see Christianity and reveals a new way of seeing—a new perspective that can overcome the differences between the literalists and progressives, a path that emphasizes following "the way" of Jesus, the original name of the Jesus movement.

Borg introduces us to a Jesus we have never really met before, a religious revolutionary who brought transformation, not doctrine. Jesus remains the decisive revelation of God, but we now encounter him as both a reality and a role model centered in God, focused on both personal and political transformation, emphasizing practices rather than beliefs, and exemplifying a faith characterized by deep commitment and gentle certitude.

In a time when Christians are deeply divided, Borg's magisterial work introduces a new conversation about Jesus, the person through whom we see clearly God's character and passion incarnate in a human life. For followers of Jesus, this is the conversation that matters most. You will be inspired.