And They'll All Talk About Us When We Die

In just a few hours we will commemorate the last hours of Jesus's life at a Maundy Thursday meal (6:30 p.m.) and worship service (7:30 p.m.) I am reading through The Last Week of the life of Jesus through the eyes of Mark and with the assistance of scholars Marcus Borg and Dominic Crossan. Another helpful resource is the new book by John Shelby Spong, Jesus for the Non-Religious. Spong suggests that the last 24 hours of the life of Jesus in Mark's Gospel is written as an ancient liturgical drama in eight three-hour segments. It begins with the supper at 6 p.m. and concludes at 6 p.m. on Friday with Jesus buried in the tomb.

Tonight, at our Maundy Thursday service, we are going to participate in that liturgical form. Here are the eight segments:

In Mark, Jesus and the disciples have a Passover meal in which Jesus says that the bread is his body and the wine his blood of the covenant. It is unlikely that this goes back to the historical Jesus. It sounds like a post-Easter ritualization. It wasn't the only way the early communities remembered Jesus and his meal practice. The Didache, which could predate the Gospels has a liturgy for communion that has no body and blood symbolism. 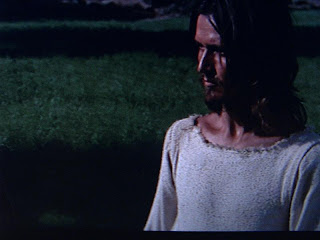 After the meal, they go to the Garden of Gethsemane at the foot of the Mount of Olives where Jesus prays for three hours. There he says that his disciples will all scatter and that Peter will deny him three times. The disciples protest and vow to be faithful. However, even his three favorites, Peter, James and John are unable to keep awake while Jesus prays. It is hard to imagine that his disciples will be much help. At midnight he is arrested and Judas betrays him with a kiss. "All of them deserted him and fled." (14:50)

Jesus is taken to the high priest and in the middle of the night he is questioned. Mark says that different people say different things and their testimonies do not agree. Finally, the high priest asks Jesus if he is "the Messiah, the Son of the Blessed One?" Jesus says, "I am, and you will see the Son of Man seated at the right hand of the Power, and coming with the clouds of heaven."

In other words, Jesus is saying that God's kingdom is about to come in power, now. This all sounds like post-Easter confessional language including the question by the high priest. In fact, it is likely that we are fully in the realm of fiction now. The trial and crucifixion is based on Psalm 22 and Isaiah 53.

We may have learned in Sunday School that Jesus fulfilled prophecy. From a historical perspective, it is the other way around. Decades after the death of Jesus, the followers wrote the story of Jesus by combing through the scriptures to find words and symbols that would be appropriate to him. Check out the comparisons between Psalm 22 and Mark 15: 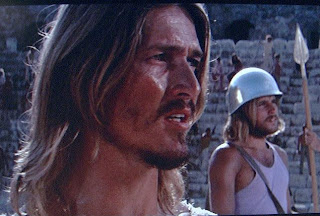 Here is how I see it. Mark's account of the trial and crucifixion of Jesus is a fiction. None of this happened in the sense we think of things happening. However, the storytellers can only talk about the impact of Jesus, the God-presence they experienced in him, through the symbols they know. Mark is writing, as I said the other day, a parable of discipleship. Look at what happens to Jesus. Can you drink that cup? That is what Mark is asking his readers.

When the high priest questions Jesus and Jesus responds with the language of apocalypse found in Daniel 7, we get an insight of Mark's hope. He sees in Jesus, his person and his way, the way of the kingdom of God.

At three a.m. Mark shifts to Peter. Peter denies Jesus three times, once per hour perhaps, until 6 a.m. when the cockcrows and it is Friday morning. Peter, the rock, fails. It's not easy following Jesus, at least as Mark portrays him.

I wonder if Mark writes his story about the disciples who were at one time failures but now have now proven faithful. Mark is encouraging his audience and the rest of us who think that we could never be like them. In our own failure of nerve, we think we blew our chance, but hey, so did Peter. So did the twelve, so even, Judas. Perhaps there is forgiveness for all, yes even Judas. That could be one reason Mark is so hard on the disciples.

Or maybe he just never liked them! Perhaps in Mark's eyes, the twelve were always failures and the audience he writes for can do better. Don't look to the disciples for guidance. Look to the unnamed woman who anointed his head with costly ointment. In either case, Mark is, I think, a parable for discipleship. The disciples show how not to do it! Jesus shows the way.
Posted by John Shuck at 4/05/2007 12:38:00 PM