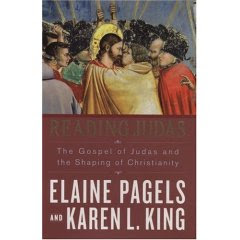 What do Wiley Coyote, Benedict Arnold and Judas Iscariot have in common? Check it out as Steven Colbert interviews Elaine Pagels about the new book she co-authored with Karen King, Reading Judas: The Gospel of Judas and the Shaping of Christianity. Thanks to April DeConick for this link.


This is fascinating stuff. According to Pagels and King, the issue in the early Christian movement had to do with martyrdom. Some Christians thought that God demanded of them to go to the cross (ie. human sacrifice). The community of Judas thought that was a pretty dumb idea. The good news (gospel) of Judas is that people shouldn't listen to those leaders who tell them to go and sacrifice themselves. What kind of God would demand of its people to go and have themselves killed?

"But, if God doesn't want sacrifices, then how can Jesus' sacrifice at the hands of Judas be understood by Pagels-King as a good deed by a hero, one that Jesus asks him to do? Does anyone have any ideas?"

This is a good question. If the Gospel of Judas as a whole is good news, is the character Judas protrayed therein a hero or not? It is a difficult question. On one hand he is praised by Jesus and told to sacrifice him. This doesn't quite make sense if the Gospel of Judas is against human sacrifice and the atonement theory. I am going to puzzle over this for awhile as I await Dr. DeConick's book about Judas, The Thirteenth Apostle: What the Gospel of Judas Really Says, due to come out this Fall. Here is what she says about Judas:

“I didn’t find the sublime Judas, at least not in Coptic. What I found were a series of English translation choices made by the National Geographic team, choices that permitted a different Judas to emerge in the English translation than in the Coptic original. Judas was not only not sublime, he was far more demonic than any Judas I know in any other piece of early Christian literature, Gnostic or otherwise.” (Read More)

This does bring up the whole issue of atonement regardless of whether Judas is a hero or villain. That God willed Jesus to die is a rather barbaric notion. Not all Christians agreed with it. What kind of God would demand that? I tend to side with Bob Funk on this point:

The doctrine of the atonement—the claim that God killed his own son in order to satisfy his thirst for satisfaction—is subrational and subethical. This monstrous doctrine is the stepchild of a primitive sacrificial system in which the gods had to be appeased by offering them some special gift, such as a child or an animal.