He is Going Ahead of You... 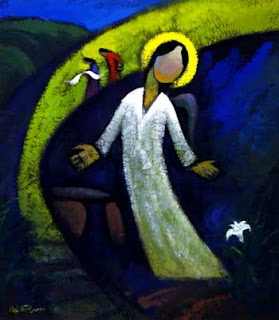 He-Is-Not-Here, by He Qi, China

When the sabbath was over, Mary Magdalene, and Mary the mother of James, and Salome bought spices, so that they might go and anoint him. And very early on the first day of the week, when the sun had risen, they went to the tomb. They had been saying to one another, ‘Who will roll away the stone for us from the entrance to the tomb?’ When they looked up, they saw that the stone, which was very large, had already been rolled back. As they entered the tomb, they saw a young man, dressed in a white robe, sitting on the right side; and they were alarmed. But he said to them, ‘Do not be alarmed; you are looking for Jesus of Nazareth, who was crucified. He has been raised; he is not here. Look, there is the place they laid him. But go, tell his disciples and Peter that he is going ahead of you to Galilee; there you will see him, just as he told you.’ So they went out and fled from the tomb, for terror and amazement had seized them; and they said nothing to anyone, for they were afraid. Mark 16:1-8


Thus ends the last week of Jesus.
But the end is a summons to a new beginning.

Mary Magdalene, Mary the mother of James, and Salome, run from the tomb, silent, "for they were afraid." Mark ends his parable of discipleship open-ended. What will we do when summoned to follow the risen Christ who goes ahead of us to Galilee?
Will we be afraid?
What kind of earth will we be when the good seed falls upon us?

Here are the lyrics to a beautiful hymn from the Iona Community. It is called "The Summons"

Will you leave yourself behind
If I but call your name?
Will you care for cruel and kind
And never be the same?
Will you risk the hostile stare,
Should your life attract or scare?
Will you let me answer prayer
In you and you in me?

Will you let the blinded see
If I but call your name?
Will you set the prisoners free
And never be the same?
Will you kiss the leper clean,
And do such as this unseen,
And admit to what I mean
In you and you in me?

Will you love the 'you' you hide
If I but call your name?
Will you quell the fear inside
And never be the same?
Will you use the faith you've found
To reshape the world around,
Through my sight and touch and sound
In you and you in me?

Lord, your summons echoes true
When you but call my name.
Let me turn and follow you
And never be the same.
In your company I'll go
Where your love and footsteps show.
Thus I'll move and live and grow
In you and you in me.


Have a Blessed Easter!