I am impressed with James Tabor. I have not met him. I have exchanged a couple of e-mails. But I like him. When Ted Koppel did the response to the Discovery Channel's Lost Tomb of Jesus, James Tabor came across as cool and scholarly. At the risk of putting him on a pedestal, he seemed to me to be someone with whom I would like to have long conversations.

I am a member of the Westar Institute, just an associate, but I serve on the Liturgy and Literacy Seminar. It has been the most rewarding thing I have done regarding my continuing education as a minister. I admire the community of Westar. They are the tops. The Jesus Seminar scholars take a different angle from James Tabor. They see Jesus as non-apocalyptic. As I understand it, the parables and aphorisms of Jesus are central. James Tabor sees Jesus as part of the apocalyptic movement. The Dead Sea Scrolls are a critical part of his view. In fact, Dr. Tabor has made me rethink that issue. I am in the muddled middle on all of this right now. I don't think it is a bad place to be. It is not a good place to be either. It is just a place. 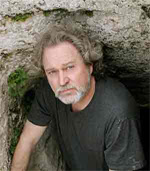 But this is what I like most about Dr. Tabor. He has taken a most unpopular position. He is criticized from both the right and the left regarding the Talpiot Tomb. He is a lone voice in this. He has defended the integrity of Simcha Jacobovici and James Cameron, even as he has disagreements with some of their conclusions. He blogs daily and his tone and his information is always measured and insightful. Frankly, the Talpiot Tomb isn't even his main thing. His scholarly work is mostly about Jesus and his family, most notably, the brother of Jesus, James, and the Jerusalem tradition. He has done some very extensive work. The other night I read again the Jesus Dynasty and I liked it better the second time through. Dr. Tabor has stuck his neck out on something that isn't even central to his thesis. He sticks his neck out because he thinks it deserves a hearing. That's it. Give it a hearing.