Kurt Vonnegut is in Heaven Now 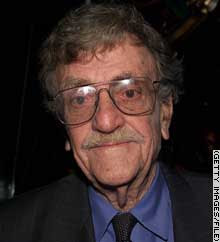 I think he would chuckle at the title of this post.

One of my all-time favorite writers, Kurt Vonnegut died Wednesday. He was one of the greats. At a memorial for his friend, Isaac Asimov, Vonnegut brought down the secular humanist house by announcing, "Isaac is in heaven now."


He hoped that someone would say the same thing at his memorial. Vonnegut was beyond mythical notions of heaven and hell. He taught us what it was to be human.

His last, A Man Without A Country, was somber. He reflected on the state of humanity in the 21st century, wondering why human beings didn't like living on Earth very much. His advice to his children and grandchildren in light of what is to come in the 21st century due to all of the plagues humanity has wrought upon itself is this: "Be kind. For God's sake, be kind."