15 Then they came to Jerusalem. And he entered the temple and began to drive out those who were selling and those who were buying in the temple, and he overturned the tables of the money-changers and the seats of those who sold doves; 16and he would not allow anyone to carry anything through the temple. 17He was teaching and saying, ‘Is it not written, “My house shall be called a house of prayer for all the nations”? But you have made it a den of robbers.’
18And when the chief priests and the scribes heard it, they kept looking for a way to kill him; for they were afraid of him, because the whole crowd was spellbound by his teaching. 19And when evening came, Jesus and his disciples went out of the city. Mark 11:15-19 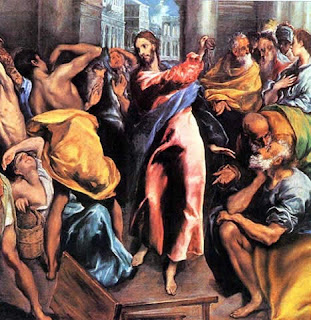 El Greco, "Jesus Overturning the Tables of the Moneychangers" (late 16th c.)
During Holy Week, I am looking again at the last week recorded in the Gospel of Mark. The excellent book by Marcus Borg and John Dominic Crossan, The Last Week will be my guide.

We began with Palm Sunday, where Jesus lampoons the Empire's military parade by riding in on a donkey in the spirit of Zechariah 9:9-11.

On Monday, Jesus and his followers enter the temple and turn over tables in the outer courtyard. He creates a disturbance and then teaches. I think this scene as well as the Palm Sunday parade does contain history remembered. Jesus is self-consciously acting in a prophetic way. There are common misconceptions of what he is doing:

1) Jesus objects to the selling in the temple. This is a common interpretation but it hardly makes sense. People would travel for miles. It would be impractical to bring sacrificial animals with them. This is where they could purchase animals and make currency exchanges. There is no reason to think that Jesus objects to this. There is no reason to think that the moneychangers are ripping people off.

2) Jesus is making a statement against Judaism and the temple sacrificial system. Again, this makes little sense. Jesus lived as a Jew and died as a Jew. Temple sacrifices were a central part of worship. The idea that Jesus came to replace Judaism is obviously very late, after the destruction of the Temple and after various forms of the Jesus movement began to separate from their Jewish roots.

3) The emotions of Jesus got the better of him. Instead, we should see this was a planned event. The day before, Sunday, he walks into the temple, checks it out, then leaves. It was likely that he was scoping out the situation with his disciples to make plans for the next day's demonstration.

As Borg and Crossan point out, the best way to interpret the actions of Jesus is to focus on the teachings of Jesus. How did Jesus interpret his action? After turning the tables, likely with the assistance of his disciples, Jesus says: ‘Is it not written, “My house shall be called a house of prayer for all the nations”? But you have made it a den of robbers.’

Jesus is making reference to Jeremiah 7:1-11. Jeremiah is told by the Lord to stand at the gate of the temple and tell the people who are entering the gates to amend their ways. Jeremiah is to say to the people:

5 For if you truly amend your ways and your doings, if you truly act justly one with another, 6if you do not oppress the alien, the orphan, and the widow, or shed innocent blood in this place, and if you do not go after other gods to your own hurt, 7then I will dwell with you in this place, in the land that I gave of old to your ancestors for ever and ever.
Justice before worship. Then the clincher:

How do we know that Jesus is speaking against the scribes and priests? Directly following his teaching, we read:

18And when the chief priests and the scribes heard it, they kept looking for a way to kill him; for they were afraid of him, because the whole crowd was spellbound by his teaching.

It is easy to see how Jesus is headed for trouble. The crowd is on his side, but his searing indictment of the temple authorities who have been collaborating with Rome to keep the people in oppression has angered them. It has angered them enough to want him dead.
Posted by John Shuck at 4/02/2007 07:42:00 AM