Our denominational magazine, Presbyterians Today gave my blog a mention this month. Thanks for the shout by Jody Harrington who writes a column about blogging. Here is the mention:

Among the pastors who regularly comment on the controversial issues from the progressive/liberal viewpoint are Shawn Coons and John Shuck.

Controversial is good, right? Thanks, Jody! Jody, by the way, blogs at Quotidian Grace. 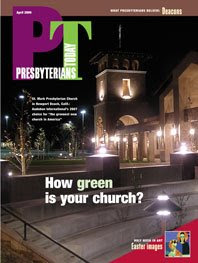 The cover article this month is How Green Is Your Church?

From small congregations (of which there are many) to big-steeple churches, Presbyterians are becoming more interested in “going green.” It’s a term that some critics say is over-used, but whatever the motivation, more churches are doing it.

“Presbyterians are getting involved, asking questions, asking for resources at a much higher rate,” says Rebecca Barnes-Davies, former coordinator of Presbyterians for Restoring Creation. “We’ve seen a pretty drastic increase in the number of people who are worried, particularly about climate change.”

They are embracing the call to be responsible stewards of God’s creation...

The article is filled with examples of congregations who are enacting energy-saving and eco-friendly measures. There are also links to many caring for creation resources.

You can also subscribe on-line to PT and save a forest.

Our little club of greenies is trying its best to do our part. We have a Green Team that helps the congregation think about ways to do things for Earth both as a congregation and as individuals. Our peacemaking committee has helped to get that rolling. We have a ways to go, but it is a start.

How green is your church?