Celebrate While You Have the Coin--A Sermon

Celebrate While You Have the Coin
John Shuck

Luke 15:8-9
Jesus asked this question:
“Is there any woman with ten silver coins,
who if she loses one,
wouldn’t light a lamp and sweep the house
and search carefully until she finds it?
When she finds it,
she invites her friends and neighbors over and says,
‘Celebrate with me,
because I have found the silver coin I had lost.’”
Would you do it?

If you lost a coin, and you managed to find it,
would you invite your neighbors over and throw a party for them?

Truth be told, I am not sure if I would.
I am probably more stingy than that.

Keep that in mind.
That is one question the parable is asking of us:

Would you throw a party?

Are you worth a party?

This parable is only found in Luke’s Gospel.
In Luke it is paired with the parable of the man who had 100 sheep and loses one.
He goes and searches until he finds it and then invites the neighbors over for a party.

Then Luke adds the parable of the man who had two sons.
The younger takes his inheritance squanders it,
returns home and is welcomed by the Father who invites the neighbors for a party.

Getting the theme?
Party on.

Also in Luke’s setting are a bunch of religious people who don’t like parties.
They are the Pharisees and the Scribes.
This is the setting:

Now all the tax-collectors and sinners were coming near to listen to him. And the Pharisees and the scribes were grumbling and saying, ‘This fellow welcomes sinners and eats with them.’

The coin parable is unique.
We only find it in Luke.
Scholars kick it back and forth as to whether Luke invented the parable or not.
It seems more likely to me that it was independent and used by Luke.

It sounds similar to this rabbinic parable in the Midrash Rabbah:

If a man loses a sela or an obol in his house (those are ancient terms for shekel or coin), he lights lamp after lamp, wick after wick, till he finds it. Now does it stand to reason: if for these things which are only ephemeral and of this world a man will light so many lamps and lights till he finds where they are hidden, for the words of Torah which after the life both of this world and the next world, ought you not to search as for hidden treasures?
--Bernard Brandon Scott, Hear Then The Parable, p. 312.

The point of that story is to admonish you spend your time and your effort searching for that which is sacred, wise, and good, since you do at least that much for things of this world.

There is certainly an echo with Jesus’ parable to the parable in the Midrash.

What about this coin?
Is it valuable?
The coin is a drachma, equal in value to the denarius.
It was probably worth about as much as a peasant laborer would make in one day.
Certainly not much, unless you are a peasant.

One would not imagine Caesar sweeping his house with his lamp lit searching for a lost drachma.

Some have suggested that the ten coins might have been her dowry.
The custom was to wear these coins like jewelry.
We might think that losing one coin would be like losing part of an earring or other piece of jewelry that is an heirloom.
It would have value beyond actual monetary value.
The parable doesn’t say that, but it opens us up to explore that.

Parables are open-ended.
We can enter the parable by taking the part of different characters.
We can in this case, be the woman.
We can be the coin. 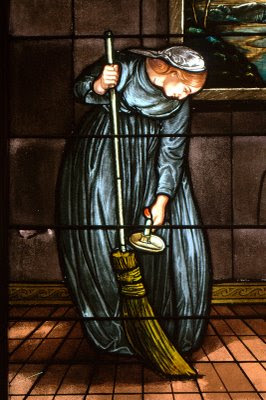 If we are the woman we can imagine losing something of great value,
perhaps even a part of ourselves.
What do we do?
We light a lamp.
We seek clarity and vision.
We sweep carefully with our broom.
We do the diligent work of self-discovery.

Maybe you don't know what you have lost.
This parable is the invitation to light a lamp for clarity and insight and sweep away the dirt and debris and find that lost coin.

Images of lighting lamps and sweeping are images of discovery and soul-searching.
When you find that part of you that has been lost, you are whole again.
You cannot keep that to yourself.
You share it.
You celebrate with others.

The parable may invite that type of exploration.
For what am I searching.
What is the lamp?
What is my broom?
How am I engaging in this search?
When I find it, what will I do to celebrate?

Maybe you have already found what you lost.
You just need to have the party.
Celebrate while you have the coin.

We can also be the coin.
There isn’t much we can do as a coin, which is a lesson as well.
As a coin, we can only be, and be found.
The parable does want to show us that the coin is not of high value in terms of Wall Street.
This coin, while having little value to Empire, has great value to this woman.

The value of the coin is shown in the parable by her diligence, effort, and celebration.
The parable reminds us that those things and perhaps people that don’t seem so important and valuable are sought after by the Universe.
The woman lighting a lamp and sweeping in search of the lost is a metaphor for the Divine search for every soul.
No soul is without value.
No person is without value.

This parable may be for you if you are feeling a bit down,
a bit lost, not thinking you are very important.

"Who cares about me and my problems?"

Even as we may feel like an old copper penny,
the Divine Wisdom Woman is diligently searching us out.
Her lamp is lit.
Her broom is sifting through the dirt.
She won’t stop until she finds us.

When She gathers us there will be great rejoicing and a party in our honor!

And the party is what it's all about.

Email ThisBlogThis!Share to TwitterShare to FacebookShare to Pinterest
Labels: sermon