Fantasy-Based Religion or Meet the Flintstones

Rather than look to what we observe and know through the scientific method, fantasy-based religion begins with a belief about a book. Notice I didn't say belief in a book or belief in the truths contained in a book, but belief about a book. Since I am writing from a Christian perspective that book is the Bible. Fantasy-based religion believes about the Bible that it is the inerrant Word of God. As such, it is without error in matters of faith, history, and science. This makes for problems in interpreting our past and our future.

Our past. From science we know that the Universe evolved over billions of years and that life evolved on Earth since the past four billion years. Homo sapiens are related to all other life-forms. The scientific theory of evolution is not simply a theory, but a scientific theory that has been accepted and modified. It will continue to be modified. That is what science is. It is open-ended. It does not try to prove anything. It tries to disprove things. That is how our knowledge builds.

We have many religious texts from antiquity. One of them is the Bible. Prior to modern science, folks thought the Bible gave an accurate history of the origins of Earth, its life, and its human-life. This early story is beautifully told in Genesis 1-11. With the advent of modern science, this story became no longer credible as history or science. It is still a beautiful story, but a story nonetheless. Religion has adapted to science, for the most part. Religious people did not lose their faith in God. They realized that God was much larger and much more mysterious. The story took on new meaning. The story told us not about the origins of the universe but about the people who told the story and about the God in whom they believed.

Enter fantasy-based religion. Threatened by science and by religious people who didn't read Genesis 1-11 as science or history, fantasy-based religion decided to react. Rather than read the narratives of Genesis 1-11 as myths or legends, they had developed a belief about the Bible as scientifically and historically accurate. This is what they thought Word of God meant. Since these narratives are the Word of God, they must be true scientifically and historically.

Something had to give. For them, it must be science. The scientific understanding of the cosmos and the development of human life must be wrong. It must be made to fit their belief about the Bible.

Meet the Flintstones. The Creation Museum just opened this past week. Here is a paragraph from their web page:

The Creation Museum will be upfront that the Bible is the supreme authority in all matters of faith and practice, and in every area it touches upon.

We’ll begin the Museum experience by showing that “facts” don’t speak for themselves (click here for a proposed drawing of this exhibit). There aren’t separate sets of “evidences” for evolution and creation—we all deal with the same evidence (we all live on the same earth, have the same fossils, observe the same animals, etc.). The difference lies in how we interpret what we study. We’ll then explore why the Bible—the “history book of the universe”—provides a reliable, eye-witness account of the beginning of all things.

After that, we'll take guests on a journey through a visual presentation of the history of the world, based on the “7 C’s of History”: Creation, Corruption, Catastrophe, Confusion, Christ, Cross, Consummation. Throughout this family-friendly experience, guests will learn how to answer the attacks on the Bible’s authority in geology, biology, anthropology, cosmology, etc., and they will discover how science actually confirms biblical history.

Here is a fun page that will tell you all about dinosaurs. 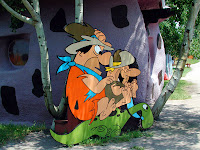 So what is the problem with the Creation Museum? Sure they are filled with nonsense. What's it hurt? We can all believe what we want, right? Yes. Everyone has the right to their own opinion. But no one has the right to their own facts. The creation theme park (and creationism in general) is a distortion of both science and religion. Ignorance eventually hurts us all.
Posted by John Shuck at 6/01/2007 06:34:00 PM