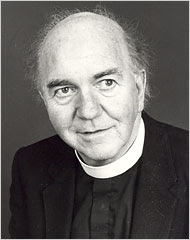 I am disappointed that this passed under my radar. One of my favorite theologians in seminary, John Macquarrie, died on May 28th. He worked on bridging the gap between orthodox Christianity and the modern world. Here is his obituary in the Independent and in the NY Times.

For Macquarrie, God was neither personal nor impersonal , but supra-personal. This is from the NY Times Obit:

The God in which Dr. Macquarrie believed was Being itself, a definition that to him made it meaningless to suggest that God was dead or did not exist. In this, he adopted aspects of Heidegger’s search for the meaning of being, although he eschewed Heidegger’s pro-Nazi views.

Dr. Macquarrie wrote that all language about God was symbolic and not to be taken literally. But it must be taken seriously. To him, what separated believers from nonbelievers was that believers had experienced the revelation that the creation and its existence are good.

“Faith’s name for reality is God,” Dr. Macquarrie wrote in “Paths in Spirituality.”

He said that the New Testament was misread to make Jesus seem divine, a view cemented into the church’s early creeds. His Jesus was fully but not merely human, being the one human who most perfectly mirrored God’s presence on earth.

In a speech in Richmond, Va., in 1993, he characterized Jesus as “a human being who was the bearer and the revealer of a deity.” (Read More) 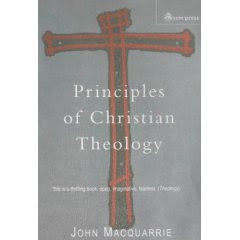 His Principles of Christian Theology was our central text for my Introduction to Theology at Princeton. He also published a fine book in 1991, entitled Jesus Christ in Modern Thought.

A few sentences about Resurrection from Rev. Dr. John Macquarrie:

"...what is resurrected is not the dead body that has been laid in the grave, not the body of flesh and blood and carbon chemistry by which human beings live on earth. (This point raises furhter problems about the story of an empty tomb). That physical body is like an automobile--it has a built-in obsolescence, and though it may keep going for seventy or eighty or even a hundred years, it will eventually wear out and perish in death. So resurrection cannot be anything so simple as the resuscitation of a corpse, for that would be only a temporary postponement of death, which would come eventually. It would be quite different from the resurrection of Jesus Christ, who, the New Testament claims, has conquered death and is alive for ever." (p. 408)

That is what Resurrection is not. What might it be? 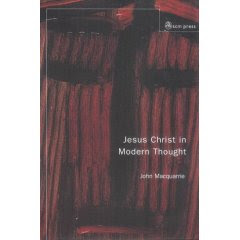 We have to get beyond the thinking that 'body' means merely or even primarily the familiar structure of bones, flesh, blood and so on. Rather 'body' is that aspect of one's being whereby one is inserted into a world, and so empowered to perceive, communicate and act in the world. The bodies that we have insert us into this earthly world of space and time, and empower us to percieve , communicate and act in this world. But may there be other 'worlds', other systems of relationships into which we are differently inserted? Are there, for instance, personal or interpersonal worlds, in which persons would be related in a manner different from that which depends on the bodily senses? Do we already have some hint of the possibiity in our present experience, when peope claim to be in communion with one another, though not using words or touching or looking at each other?...The mystery of how mind and body are related in the human being is still far from being fully understood, and therefore the debate about the resurrection of Jesus Christ is still going on. Perhaps resurrection is transcendence to a new level in the being of the human person, a level which eludes are understanding so long as we are seeing it only from below. In any case, we are not confined to those visionary experiences recorded in the New Testament. Throughout the history of Christendom, men and women have claimed to have encounters with the living Christ, especialy ina eucharistic context. Are these all to be dismissed as illusory, or must they not be added to the New Testament witness as further evidences that the crucified one lives on today? (p. 408-9)