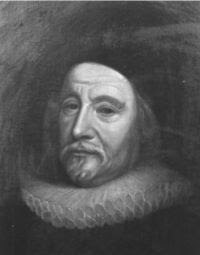 in 1650, Bishop James Ussher calculated that the universe was created October 23, 4004 BCE. Ussher was calculating about the same time that the Westminster Divines met to draft the Westminster Confession of Faith. This confession held sway for 300 years and still retains a prominent place in the PCUSA Book of Confessions. Ussher's date of creation still has a prominent place in fantasy-based religion.

Bishop Ussher calculated his figure based on information in the Bible. You can trace the genealogies, reigns of kings, and so forth to calculate the time periods. I have the Bible I was given in Sunday School when I was six. It is a King James Bible. In one of the tables in the back under the heading: "Great Periods in Bible History" you find ten periods of "Bible History" corresponding with Ussher's date.

The 17th century was a heady, rationalistic time. The Bible was the source of history and all knowledge. Everything had a place. Science served the glory of God. The Westminster Divines even postulated that God knew the number and identity of everyone who would be saved or damned. It was all fixed.

That was the 17th century. They wrote what they knew. Four hundred years from now our descendants (if they survive) will marvel at what we thought we knew. Since the 1650's, the date of creation changed. It wasn't until the 1950's that scientists have given us the date of the Big Bang at around 14 billion years ago.

The interesting question is why did the biblical authors date creation to that time period (around 6,000 years ago)? John Dominic Crossan asks this in his book God and Empire: Jesus Against Rome, Then and Now. In a fascinating chapter entitled, "God and the Ambiguity of Power":

When the biblical tradition raised inaugural and fundamental questions of meaning in Genesis 1-11, it selectively adopted and serenely adapted very ancient stories passed down from the Sumerians, those intensely competitive and magnificently creative people who lived in sourthern Mesopotamia from about 4500 to 2500 BCE. What they were attempting to think through in those narratives was the Neolithic Revolution of their own contemporary world. In, for example, their parables about the disputes between summer and winter, between cattle and grain, between plow and pickax, or (as discussed later between shepherd and farmer), the divine judment is always given to what we might call the evolutionary future among those options.

Genesis 1-11 was using, in other words, stories that dated back to the Neolithic Revolution and were originally formulated in Sumer to think through its implications. In more ways than we might want to imagine or face, therefore, our world was "created" about six thousand years ago. (p. 50)

The Neolithic Revolution (from Bartleby):

The term neolithic is used, especially in archaeology and anthropology, to designate a stage of cultural evolution or technological development characterized by the use of stone tools, the existence of settled villages largely dependent on domesticated plants and animals, and the presence of such crafts as pottery and weaving.

The story of Cain and Abel is the biblical version of the rise of civilization. Cain (the Farmer) and Abel (the Shepherd) offer their gifts to God. God accepts Abel's gift but not Cain's. Cain kills Abel. Crossan writes:

That inaugral fratricide was the murder of a shepherd by a farmer on his own farm. That is the first act in the invention of human civilization--the farmer replacing the shepherd--and God does not punish the farmer but only marks him forever as the future of a lost past. There is not counterviolence from God--not even the appropriate divine vengeance when, as God, says, "your brother's blood is crying out to me from the ground!" p. 60-1)

God does not want Cain's offering. Cain represents civilization. Yet civilization is where humanity is headed. Crossan writes:

Next comes the second act in the rise of civlization's normalcy. After the birth of his first son from an unnamed wife, Cain "built a city, and named it Enoch after his son Enoch" (4:17). The farmer displaces the shepherd a builds a city--with a few biblical sentences covering several evolutionary millenia." (p. 61)

Cain introduces violence to the biblical narrative. It is no coincidence that Cain is also the father of civilization. Crossan quotes Robert McElvaine in his 2001 book Eve's Seed: Biology, The Sexes, and the Course of History:

"Cain, the introducer of violence, is, moreover, identified as the father--or grandfather--of sedentary culture or 'civilization.'...This story corresponds neatly with the understanding that agricultural surplus eventually led to an increase in individualism, aggression, warfare, and greed." (p.100 McElvaine, p. 61 Crossan)

These are the questions:
A violent God, a violent nature, and a violent end are not inevitable. But humankind must choose. For Christians, the life of Jesus is the criterion. Look at the life of Jesus. Was Jesus violent or non-violent?

This morning, we celebrated Trinity Sunday in which is Jesus as the second person of the Trinity reveals the character of God. The answer for Christians is clear. How do we decide between a violent and a non-violent God in the Bible? As Jesus was non-violent, so God is non-violent.

Therefore, the work of the Holy Spirit is non-violence. A non-violent God pushes against the violence inherent in civilization. Civilization is not humanity, nor is it the crown of humanity's work. We can (and must) move beyond the normalcy of civilization to a non-violent future in which we seek and make peace through justice.
Posted by John Shuck at 6/02/2007 03:44:00 PM