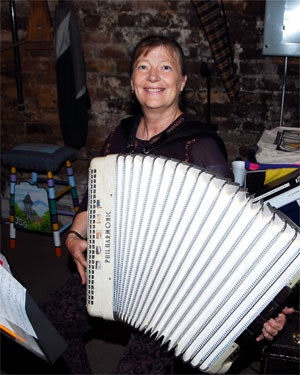 One of our church members, Linda Sorrell, was featured in today's Herald and Tribune!


Linda Sorrell’s accordion, a Philharmonic, has her name on it. In her story “Chosen By A Squeezebox,” Sorrell tells of taking a trip over the mountain to North Carolina to look at an accordion for sell -- in hopes of purchasing it for one of her students. Instead, she found the accordion that she now plays because, she said, when she opened the case to look at the accordion she saw “L, I, N, D, A” in lettering along the side. When she saw that it had her name on it, she had to buy it. H&T Photo by Charlie Mauk

Here is a little bit from the article:

Venture into the Cranberry Thistle for lunch on Wednesday and you’ll be treated to more than just a good meal. On Wednesdays you’ll also encounter the melodic sounds of Linda Sorrell and her accordion.

Sorrell’s love affair with the “squeezebox” began even when she was in the womb.....

...During her performance last Wednesday, Sorrell told those stories to the small but captivated audience. One story she told was about camping in Europe with her brother Roger. She said that she was homesick, and in the middle of Italy – and she didn’t know how to speak Italian. But, washing dishes one evening she heard a man sing a familiar song, “Come Back to Sorrento”. She began singing, but in English. “Other dishwashers started singing, too,” she said, “but they were singing in Italian, German, Spanish, and French.

“There we were in Sorrento, Italy singing the same tune in five different languages,” said Sorrell. “My homesickness disappeared and that is the first time I knew what it meant to say that music is the universal language.” (Read More)

The Cranberry Thistle is in Jonesborough.