Butte, Montana Wants Out of Iraq 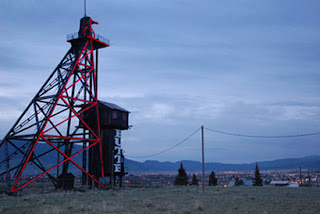 I graduated from high school in Butte, Montana, home of Evel Knievel, the Berkeley Pit, tough miners, and common sense democratic values. Folks from Butte are not afraid to speak their minds. This is from 4 & 20 Blackbirds:

Today the Butte-Silver Bow Council of Commissioners voted 8 - 4 to pass a resolution calling for a “rapid and comprehensive withdrawal” from Iraq. Butte is the first Montana city to call for the withdrawal of troops, and joins hundreds of cities and towns nationwide who have called for an end to the occupation of Iraq.

The resolution also calls on congress to fully fund mental, physical health, education, disability and rehabilitation benefits for veterans, and to pursue security and stability through diplomacy. The resolution was introduced to the council last April by a group of veterans and concerned citizens called the Butte Montanans Support our Troops and Withdrawal from Iraq Coalition.

Has your city council, church group, basket weaving club, or whatever group you can think of, made a resolution? It may sound odd for groups like city councils to make resolutions regarding the war in Iraq, but as 4 &20 Blackbirds points out:

To many, this may seem like a futile gesture. It’s not. If enough cities, counties, and states vote on resolutions like this, it will slowly seep into the political consciousness of those living within the Beltway that we, the people, want out of Iraq.