I grabbed this from Jim McGrath's blog. 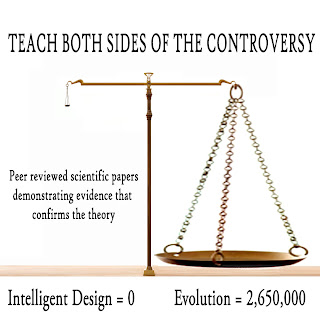 I can't imagine anyone taking seriously in any other discipline a demand that a viewpoint that has produced no genuine results, made no contributions to our understanding, and in so many other ways failed to pass scholarly muster. I hope that any educators who do mention ID will show the picture below. The only way to accurately "teach the controversy" is to explain to students why, among experts in biology, paleontology, genetics, and other relevant disciplines, there isn't one.

We are moving beyond the "controversy" with our weekend coming up. Michael Dowd's book, Thank God for Evolution assumes evolutionary theory and then asks, what does it mean? What does it mean for us existentially whether we are religious or not?

You seem to set up evolution as a beneficial and even beautiful thing for life on Earth. Though I accept that it exists, I think it's a horrible thing. I can't get past what's involved in the mechanism of evolution. Death, pain, cruelty, domination. Those are the things that push evolution forward. What more horrible system could there be? It certainly proves that there is no sentient being that could be considered a loving god. If there were, the world and life would be completely different than they are now. I can see no benevolent master plan.

...nowhere in my book do I suggest, or even imply, that there is a force, intelligence, or consciousness outside the Universe (or within it, for that matter) that is pulling strings or making evolution go in a benevolent direction....

When I make the case for chaos and "bad news" catalyzing evolutionary creativity, I'm not suggesting that a Supreme Being or divine intelligence is intending favorable outcomes. Rather, I am simply pointing out the demonstrable fact that how we choose to interpret reality and life’s events profoundly affects the quality of our existence—and that this is just as true collectively as it is individually.

In my book, I mention that many, including myself, have found the mantra "the Universe is conspiring on my behalf" to be an exceedingly useful outlook in most situations. That is, when I act as if this were true, I love my life. I do not, however, suggest that this interpretation is “The Truth.” It is a statement of subjective meaningfulness, not objective truth. And there are plenty of studies that show that those who hold such an outlook live happier, healthier, longer lives. As the great philosopher and father of American pragmatism, William James, wrote in his book Pluralistic Universe, “From a pragmatic point of view, the difference between living against a background of foreignness and one of intimacy means the difference between a general habit of wariness and one of trust.”

Michael makes a critically important point here. Theology, myth-making, meaning-making, or what he calls "night language" must correspond to observation and theory or "day language" or else it makes no sense. But it cannot be confused with day language. The task of theology and meaning-making is to make our lives more fulfilled with the reality we face. The reality we face is shown to us through modern cosmology and evolution. We can choose to be bummed about it or to be inspired.
Posted by John Shuck at 8/27/2008 07:36:00 PM