The Republicans Bumped Me!


John McCain has made it personal. Obviously, he doesn't want me talking about evolution and the Jesus Seminar in the Tri-Cities.

His little stunt today of interrupting the WCYB channel 5 noon news with his announcement of a running mate sealed the deal. I was scheduled to be on that noon news show. I was there. I was ready to go on. But I got bumped in favor of McCain's tribute to Northern Exposure. Oh, but I will be back, Mr. McCain. You can count on that. I'll be back Monday, Labor Day, on the WCYB noon news. 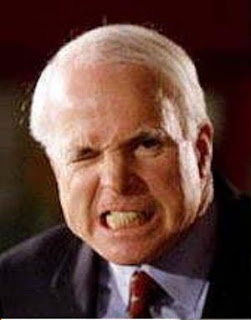 I'll be back to talk about evolution and the Jesus Seminar. And you won't stop me. I won't be silenced by you.

Now, since I have your ear, the shameless ploy of selecting Alaska governor, Sarah Palin, in order to steal Hillary Clinton supporters won't work. Sure, she's cute (and younger than I am for crying out loud). I am certainly fond of Alaska. But Clinton supporters aren't going to trade the issues for which they have fought their whole lives for some Alaskan eye candy.