If Fred continues to stay away from church, he may not know how to vote. Wallbuilders, a religious right organization has church bulletin inserts all ready to go. You can be completely misinformed about the candidates on all the issues that Jesus rates a priority. 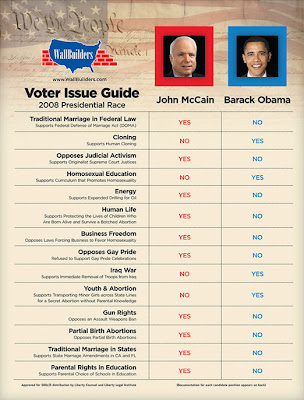 In Barton's first Voter Guide, McCain had a "NO" in his column for "Supports a national Human Life Amendment." So, to give the now preferred candidate a "YES" on this issue, Barton just changed the criteria from "Supports a national Human Life Amendment" to "Supports Protecting the Lives of Children Who Are Born Alive and Survive a Botched Abortion." Obama's confidence in doctors to make the ethical decision to do whatever they can to save a living baby, with or without a law requiring them to do so, of course, gets him a "NO" for this one.