Within the last 100 years or so, science has given us a picture of Earth and the Universe that is far beyond what the ancients imagined, or even the Reformers or Founding Fathers of the United States could have imagined. Now we know that
The Galaxy Song is a good reminder.

Not only has Earth been spinning and revolving around our star for 4.6 billions years, there is no reason to think it won't spin for billions of years more. When our star finally uses up its energy, the galaxy and the universe will continue on its way.

The picture was far different when the biblical texts were written. At that time Earth was conceived as flat with heaven above. 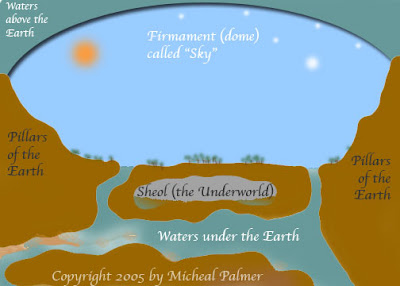 One could easily imagine this Earth and Heaven coming to an end as it came in the beginning by the Word of God. Humanity has been de-centralized by our scientific understanding. Human beings and the planet we inhabit is no longer the center of the universe, nor are human beings the crown of creation. Who knows what is out there? Who knows where evolution will take us?

Yet, the majority of Americans do not "believe in" evolution according to polls. As if we we could not "believe in" gravity! A vast number (whether it is a majority or not, I do not know) think that Earth will come to some kind of "end" and soon. This shows that Americans are deeply ignorant of science and the Bible.

The Bible is often used as a source (the Book of Daniel, Revelation, and the little apocalypse of Mark 13). It is not difficult to find preachers who by referring to passages in the Bible, suggest that the "end times" are near. Christ will come in a literal way to make a new Heaven and a new Earth. The popularity of the Left Behind novels, televangelists such as Pat Robertson, James Dobson, John Hagee, Jack Van Impe, and others continue to intepret political events in the light of so-called biblical prophecy as if the Bible was talking about us.

The basic picture in a nutshell is this:

The world is going to get worse and worse, wars, famine etc.
The "true believers" will be raptured up into the clouds.
There will be a period of tribulation for those left behind.
There will be a big war (Armageddon) on the plains of Megiddo in the Holy Land.
Finally, after a lot stuff, Christ will return and establish an everlasting peace.

The Islamic tradition also has an endtime scenario.

I offer two websites of thousands that offer their version of "the end":

If you read these folks, you find common themes:
Here is an excellent video by PBS, Apocalypse: The Evolution of Apocalyptic Belief and How It Shaped the Western World

Signorelli's depiction of the antichrist as jesus' demonic twin

A scientific approach to the future.
Check this out.

Some of the endtime enthusiasts think that nuclear war is part of God's plan.