This is from CNN today:

No sign of letup in rise of gasoline prices

NEW YORK (CNNMoney.com) -- Gasoline prices hit a record high for the fourth straight day Wednesday, according to AAA, and more records could be on the way.

The motorist group said the average price for a gallon of self-serve unleaded gasoline rose to $3.103 in its latest reading, which is based on a daily survey of purchases at up to 85,000 gas stations. That's up from Tuesday's record of $3.087 a gallon. Prices are now up 2.3 percent in just the last week and 8.6 percent over the past month.

California had the highest average price, with a gallon of self-serve unleaded costing $3.474 in the latest survey, although that was off of Tuesday's reading of $3.478.

Gasoline is around $2.89 here in East Tennessee. My favorite station, the BP on G Street in Elizabethton was $2.79 yesterday. So what is up? Conspiracy? Greedy oil companies? I don't think so. I think we are just beginning to feel the effects of Peak Oil.

You can read what I have written about Peak Oil, here, here, here, here, here, and here. And, yes, here. Gasoline prices (and of course all other energy prices) will continue to rise. We are on the downslope of the oil supply curve. We can blame Al Gore, or we can get our heads out of the sand and face this.

Part of the solution is to build confidence. Doing something small generates ideas. How can each of us become more energy-independent and environmentally-friendly? That will require discussion and the sharing of ideas and support for one another.

On Sunday, May 27th from 7-9pm we are going to host a screening of Kilowatt Ours, a great little film about our energy dependence and the creativity of individuals and communities to become more green in regards to energy use. Here is a press release:

Vice President Dick Cheney, in his well-known energy policy speech of April 30, 2001, claimed that America must build 1900 new power plants by 2020. That is one new power plant per week for the next two decades in order to meet projected electricity demands. “Kilowatt Ours” challenges this assertion by presenting an alternative based on conservation and renewable power. 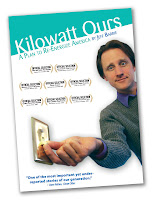 Produced on a $20,000 budget, this 65-minute documentary reveals the underreported side effects resulting from America’s voracious appetite for coal-generated electricity. “Kilowatt Ours” follows filmmaker Jeff Barrie on his 18-month journey across the southeast United States, where more than six tons of coal are burned to generate electricity for the average home annually.

Barrie takes viewers from our light switches at home to the sources of our energy, examining social and environmental consequences such as global warming, mountain top removal, air pollution, childhood asthma and mercury contamination. Leaving the devastation behind, the story makes an uplifting turn, uncovering hope-filled examples of conservation, efficiency and renewable power at work today.

Barrie makes the case that environmental problems could be minimized by utilizing alternative technologies that are available today. The solutions are surprisingly accessible and affordable to the average American. “Kilowatt Ours” presents viewers with an ambitious plan for shifting America’s energy paradigm towards conservation and renewable power.

Currently, Barrie is taking his film across the eastern United States with the hope of igniting an energy conservation craze. His “Southern Energy Conservation Initiative” is designed to help homeowners save hundreds of dollars on energy bills while curbing the harmful effects of energy production.

Here are some scenes from the film:

“What would you find if you traced the wires from your light
switch to its energy source? Mountaintop removal, childhood asthma, global warming…
or hope?” – Jeff Barrie

In the Appalachians the cheapest and easiest way to
extract coal from the mountains is a process called “mountaintop removal.”

“They use 2,500 tons of explosives a day in Appalachia, and that’s
why I say we are under assault. We are under attack.” – Judy Bonds, Community
Activist

“We are poisoning our grandchildren. We’ve got to stop.”
- Rev. Woody Bartlett

The roof of this carport is covered with solar collectors that
provide energy for TVA’s Green Power Switch.

This Tennessee homeowner generates all the
energy his family needs using solar panels, because his home consumes only one-third the average homes’ energy use.

“With the money we saved on electricity we could
afford to purchase 5 blocks of Green Power. We finally reached our goal of 100% renewable power at home!” – Jeff Barrie