Quakerism: A Theology for Our Time

I want to offer a plug for Dr. Patricia Williams' new book: Quakerism: A Theology for Our Time. It is just being published as we speak and she may have copies for us at the conference. You will also be able to order a copy from the publisher. I will offer information about that when I get it. Truthfully, I don't know too much about the Quaker (Friends) tradition, so I am excited to hear more about it when she visits Elizabethton next week. Here is an outline and the introduction to her book:

Part 2: Scripture: The Challenge of Rational Criticism
6. The Fall of Adam and Eve
7. Salvation
8. The Authority of Scripture
9. Universalism

Part 3. Science: The Encounter with Empirical Knowledge
10. Science in the Light
11. Origins
12. Human Nature
13. A Theology for Our Time

Biblical scholars are crying out for a new paradigm for Christianity. Why? Scholarship on the book of Genesis shows the doctrine of the Fall (that human nature changes for the worse) is not in the text, and this alters the atonement. Scholarship on the Gospels distinguishes sayings and deeds of the historical Jesus from those the later church created. This influences Jesus’ meaning for today. Scholarship shows St. Paul thought the law superseded and, so, undermines Christian embrace of the laws in the Hebrew Scriptures, including the Ten Commandments. And, finally, documentary discoveries are altering scholarly understanding of late Judaism and early Christianity. The early church was not orthodox, but replete with a concatenation of beliefs.

Clearly, the scholarship demands that Christianity change. Blessedly, the altered paradigm scholars seek has existed since the seventeenth century. Quakers created it. Quakers based their defining belief, that all people have a measure of the divine Light within them, on experience, and their other beliefs follow logically from it. 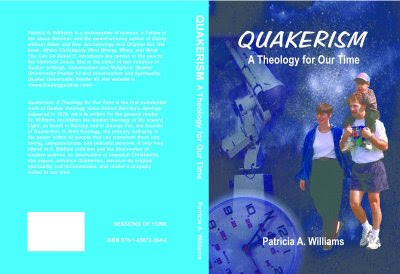 Although this book concentrates on the Quakerism of the seventeenth century, the Quakerism I describe is alive and well in the twenty-first. I have emphasized early Quakerism to avoid confusion about whether I am referring to early or contemporary Quaker beliefs and practices. Those Quakers today known as unprogrammed Quakers carry on the traditions of the seventeenth century, and therefore their theology merges here with that of early Quakerism. Most of today’s Quakers are orthodox Christians and thus fall under my coverage of Christian orthodoxy.

We often think of our religious traditions as fixed and that we must choose between one and another. Yet, we can be informed by different traditions and include their insights into our own. That to me is spiritual growth.
Posted by John Shuck at 5/10/2007 08:32:00 AM