John Dominic Crossan is possibly the finest biblical scholar in the United States, perhaps the world. When I read his work, I just say, "Yes, he has nailed it." His latest work, God and Empire: Jesus Against Rome Then and Now is one of his best. His analysis of the first eleven chapters of Genesis is worth the price of the book. He doesn't end there. He writes profoundly about the first century and applies it to the 21st.

Amidst all the scholars of the "Historical Jesus", Crossan understands better than any other that I have read about the matrix of Roman Imperial Theology in which Jesus and the Gospels are embedded. 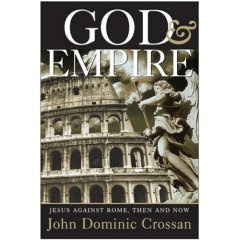 "There was a human being in the first century who was called "Divine," "Son of God," "God," and "God from God," whose titles were "Lord," "Redeemer," "Liberator," and "Savior of the World." Who was that person? Most people who know the Western Tradition would probably answer, unless alerted by the question's too-obviousness, Jesus of Nazareth.

And most Christians probably think that those titles were originally created and uniquely applied to Christ. But before Jesus ever existed, all those terms belonged to Caesar Augustus. To proclaim them of Jesus the Christ was thereby to deny them of Caesar the Augustus. Christians were not simply using ordinary titles applied to all sorts of people at that time, or even extraordinary titles applied to special people in the East. They were taking the identity of the Roman emperor and giving it to a Jewish peasant. Either that was a peculiar joke and a very low lampoon, or it was what the Romans called majestas and we call high treason. (p. 28)

Here is the outline of the book:

Prologue
1. Empire and the Barbarism of Civilization
2. God and the Ambiguity of Power
3. Jesus and the Kingdom of God
4. Paul and the Justice of Equality
5. Apocalypse and the Pornography of Violence
Epilogue

That is all it takes. Five chapters to describe the biblical narrative, the person and work of Jesus, and most importantly, our work to proclaim and participate in the work of the God of non-violence over and against the violence of Empire. By any standards the U.S.A. is an Empire.

I raise three questions in this book for American Christians--or better, for Christian Americans. Since the Old Roman Empire crucified our Lord Jesus Christ, how can we be his faithful followers in America as the New Roman Empire? As we move through the book, a second question arises. Is our Christian Bible violent or non-violent--is it actually for or against Jesus's nonviolent resistance to "this world"? By the time we get to the end of the book, and especially in its final chapter, a third question will have appeared. Is Bible-fed Christian violence supporting or even instigating our imperial violence as the New Roman Empire? (p. 5)

This book is what it is about as we enter the 21st century. What does it mean to be a follower of Jesus? Crossan has continued to open my eyes to what is at stake for our planet. What will humanity decide, peace through victory, or peace through justice?

In late October 1999, I discussed "A Future for Christian Faith?" at the Westar Institute's Jesus Seminar in Santa Rosa, California, and it was published the following year in a book entitled, like the conference itself, The Once and Future Jesus. My main proposal was that, since the Age of Enlightenment has been replaced by the Age of Entertainment, the future clash would not be between science and religion but between both of them and fantasy. While noting that "the gains and losses of the Enlightenment Era are already clear and set, although, of course, there will still be legal disputes well into the next century," I explained that "what I am trying to imagine is what Christianity must do clearly and honestly to distinguish itself from fantasy. If it does not do that, it will certainly survive but as an important and even lucrative sub-division of world-wide entertainment and global illusion."

In 1999, I never imagined, even as prophetic nightmare, the speed with which faith-based thinking would morph into fantasy-based dreaming to infiltrate medicine, education, domestic program, foreign policy, and even news reporting (which would become so separated from reality that a network's boast of "we report, you decide,"could be more accurately rephrased as "we distort, you deride"). "Faith is," according to Hebrews 11:1, "the assurance of things hoped for, the conviction of things not seen." but you should not go to war on the faith-based existence of mass destruction weapons or the faith-based conviction of terrorist collusion documents. Those are, for some people, things still hoped for, still not seen. (p. 197)

It doesn't matter if you are into Jesus or not, a Christian or not. You will benefit by this fine analysis of religion and politics, realities that are inseparable.
Posted by John Shuck at 5/14/2007 09:39:00 PM