All My Bones Shake--A Review

Dr. Robert Jensen, professor of media law, ethics, and politics at the University of Texas, and member of the St. Andrew's Presbyterian Church in Austin, Texas has written a new book, 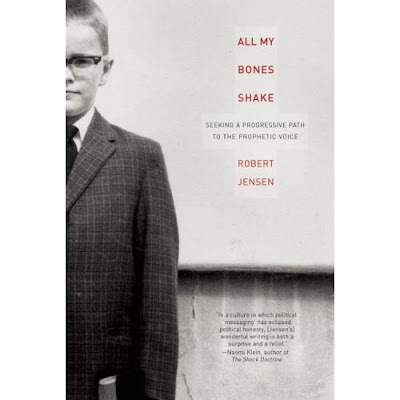 All My Bones Shake: Seeking a Progressive Path in the Prophetic Voice.


I have blogged about Dr. Jensen previously. He caught my attention as he was the centerpiece of a church kerfluffle. The church (St. Andrew's) was called on the carpet for allowing him to be a member. Groucho Marx would be amused. He recounts that charade of piety in the first chapter.

He raised eyebrows with an article he had written shortly after joining the church, Why I Am a Christian, Sort Of, that begins:

I don't believe in God.

Given these positions, this year I did the only thing that seemed sensible: I formally joined a Christian church.

The only difference between Dr. Jensen and many other church members is that he is more honest than most. He didn't think the essay would be controversial, thinking (correctly) that many people in churches believe (or don't believe) similarly. However, Jensen writes:

I underestimated the fervor with which traditional forces within my denomination would feel a need to police the boundaries of faith... p. 31

These "traditional forces" picked up on the essay convinced that St. Andrew's went too far by admitting an atheist. It became an opportunity to come after the church's pastor, Jim Rigby, who

"had successfully defended himself against denunciations from many of the same conservatives for performing commitment ceremonies for lesbian and gay couples; it's hard not to assume that lots of these folks had an interest in coming after St. Andrew's again." p. 32

Dr. Jensen's story is heartbreaking and heartwarming. Heartbreaking in that this is yet another instance in which the institution caves into fear, control, and irrelevance. Heartwarming in that this community embraced one of its own, stood by him, and refused to be bullied. (For the record, Robert Jensen is a full member in good standing at St. Andrew's by letter of transfer from the church in which he was confirmed as a youth).

Are his views that unusual? Of course not.

What if we were to walk through the Protestant churches of the United States today, especially the centrist-to-liberal churches, and ask such questions of every member? How many would be left in the pews if all had to profess a belief in the supernatural claims about God and Jesus? p. 38

When you get right down to it, it is a question of language and meaning. I don't believe in the god Dr. Jensen doesn't believe in either. Nor do I believe that the supernatural miracles attributed to Jesus happened (including rising from his grave and flying off to heaven). Many church people have doubts about these things.

His Presbyterian story is only the beginning of this important book. All My Bones Shake is a theology book. It is theology where it matters. It is about life and what it means to be human. It is also about politics. He calls it political theology or theological politics.

I take my primary task to come to terms with the dominant theology and politics of the United States, as I engage in the continuing struggle for social justice and ecological sustainability. pp. xi-xii

All My Bones Shake is structured around the command of Jesus to love God with mind, heart, soul, and strength.

God for Jensen is mystery. Not a mystery, but a name for mystery itself. Loving God is not a statement of sentimental piety or having a love affair with an imaginary being.

The command to love God can be understood as simply another way of saying that we must strive to love the mystery around us and in us rather than to be afraid of all that we cannot understand. p. 48

a reminder to have a sense of the limits of our knowledge and embrace that which is beyond limits. p. 48

That is what it means to love God with our mind.

To love God with our heart is to take our emotions seriously. The church can be a sacred space

to go deeper into ourselves so that we may be not only more fulfilled but more present for others. We do this in the presence of others for ourselves, so that we can return to others closer to wholeness and more available to them. p. 70

In this chapter Dr. Jensen revealed his heart about his own emotions and the community he found at St. Andrew's. So often people in our churches are afraid of voicing doubts for fear of reactions from others.

To love God with all our heart, I believe, means to recognize the collective nature of emotions, the way in which so much of what we feel--even though we experience it personally--is in fact shared. p. 72

To love God with soul is to be true to mystery within as opposed to the soulless forces around us:

...the system of corporate capitalism does not simply structure the economy and influence politics. It affects us all, every day, and not just in the sense that advertising shapes our tastes or influences our behavior in identifiable ways. This system, which exalts consumption and relentlessly focuses on a self-indulgent materialism, gets inside of us all--it rewires our souls. p. 87

To love God with strength is to understand power not as power over but as power with:

The task is to create a system that gives us freedom from the illegitimate authority that people and institutions attempt to impose on us, but recognizes our obligations to each other. p. 102

any intellectual, political, or theological position that asserts an absolute certainty in the truth and/or righteousness of a belief system. Such fundamentalism leads to an inclination to want to marginalize, or in some cases eliminate, alternate ways to understand and organize the world. p. 108

He describes four fundamentalisms in ascending order of danger. This for me was his most insightful chapter.

Religious fundamentalism. We know this one all too well. But it is only number four on the list of ascending dangers.

National fundamentalism. This he calls "pathological hyper-patriotism that tends to suppress internal dissent and leave many unable to hear criticism from outside." p. 109. America, the "city on the hill" practically-perfect-in-every-way blinds us to any form of self-critique. We have had a love affair with ourselves that has put the world at risk.

Economic fundamentalism. "The dominant assumption about corporate capitalism in the United States is not simply that it is the best among competing economic systems, but that it is the only sane and rational way to organize an economy in the contemporary world." p. 112

The four fundamentalisms have served to put Earth and all living things on the path to annihilation. We extract every natural resource at an increasing rate, run it through an unsustainable monster economy polluting Earth and Sky, and defend our disproportionate piece of the pie with shock and awe military technology. There is no other way. As George I told us: "The American way of life is not negotiable." That is fundamentalism.

Jensen reminds us that sustainability and justice is another way. Yet we may fail.

The ultimate test of our strength is whether we would be able to persevere in the quest for sustainability and justice even if we had good reasons to believe that both projects would ultimately fail. We can't know for sure, be can we live with that possibility? Can we ponder that and yet still commit ourselves to loving action toward others and the non-human world? p. 136

Reminding us of the Hebrew prophets (the title of the book is from a verse from Jeremiah) Jensen calls us all to find our prophetic voice.

In his final chapter, A New Communion, he writes of the importance of connecting with others, of being accountable to others, and of being in communion with each other.

My initial interest in returning to Christianity was motivated by the difficult task of organizing for progressive politics in such a country...but it quickly went further, as I realized that posing this question [what it means to be a Christian] was not only relevant for my political work but also a way for me to reflect on--not merely parrot answers to--fundamental questions that we all must face. p. 177 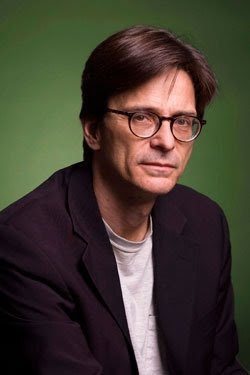 Back to the fate of Robert Jensen's soul.

Is this man a Christian?


He offers two questions for Christians:

Does Christianity name a process of seeking or is it defined by the declaration of belief?

Are we to understand God and Jesus as being with us but outside of us or with us, within us? p. 178 (italics his)

Good questions. I know what my answers are. Depending how we answer determines how we make the judgment. What do you think? Is he Christian enough for you?

All My Bones Shake is a book that says what I have been trying to say for the past three years on this blog. It is about what it means to be a human being and the importance of devoting ourselves to local communities and to the larger Earth community. It is about the importance of courage and humility and about the choices we need to make personally regarding our future on Earth. It is about politics and facing the dehumanizing forces that shape every aspect of our lives.

This book is not just for "church people" even though church folks should read it. It is for secular folks too who wonder what is happening to America and the fear, loneliness, and the betrayal we experience chasing after the charade of what is offered as "the good life." It is a book of hope as well, a "stubborn hope." There are more of you out there than you think, prophets all, waiting to connect, to find your voice, to "give a witness" to a better world and a more authentic life.