The Gospel According to Jazz 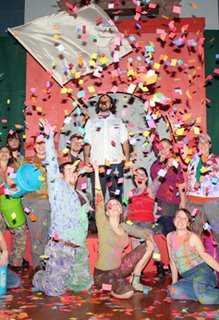 You want to check this out next weekend. This is from an e-mail from Matt Wilson:

THE GOSPEL ACCORDING TO JAZZ will enjoy two encore performances in preparation for its participation in the regional Kennedy Center/American College Theatre Festival next month in Georgia.


After its initial run at Milligan College last fall and its participation in the state theatre association festival, THE GOSPEL ACCORDING TO JAZZ was chosen as one of the TOP 7 COLLEGIATE PRODUCTIONS IN THE SOUTHEAST
(11 states)--quite an honor for Milligan College and for Johnson City.

Fueled by the vibrant, joyous tones of jazz, THE GOSPEL ACCORDING TO JAZZ is a whimsical and poignant reminiscence on the Gospel according to John for a post-Katrina world. The 26-piece jazz ensemble features musicians from the Milligan and ETSU communities as well as noted local vocalist Loretta Bowers and lead trumpet and trombone players who each have extensive recording and touring credits. This is a musical, theatrical, and spiritual event that is truly not-to-be-missed.

(Advanced tix available through the Milligan bookstore. Tickets also
available at the door. All seats, general admission, $10. Box opens
at 6:30. House opens at 7:00. Shows start at 7:30.)

Written and directed by Milligan theater professor Richard Major, the show is a message of hope set in the post-Katrina market section of New Orleans. It has a festive Mardi Gras feel to it. Fueled by the vibrant, joyous tones of jazz music, the production showcased the talents of a cast of 18 members and a musical ensemble of 26 directed by Milligan professor and local jazz talent Rick Simerly. Broadway vocalist and local gospel and jazz talent Loretta Bowers of Elizabethton, Tenn., joined the ensemble as guest vocalist.

We are of course busting buttons at First Pres., as Rick Simerly is one of our church members. You have heard it here first: We are going to get Rick and some friends to a jazz concert and worship service at First Pres., in the near future. As soon as we schedule the date, you will know. It will be cool baby.
Posted by John Shuck at 1/27/2007 09:28:00 AM