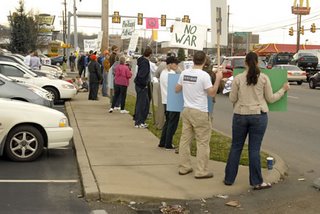 Protesters line up at the corner of North Roan Street and Mountcastle Drive Monday afternoon to demonstrate against the war in Iraq. (Lee Talbert / Johnson City Press)


This is from the front page of today's Johnson City Press:

About 50 anti-war demonstrators chanted slogans and waved placards at the corner of Mountcastle Drive and North Roan Street beginning at noon Monday, and they were met with a chorus of honking cars voicing their approval.

The protest was in response to President George Bush’s plan to send more than 20,000 additional American troops into the war in Iraq.

Some children playing on the sidewalks while their parents protested carried a sign that said, “More candy, less war.”

“This is a group of people from all walks of life, representing all political positions, exercising one of the few civil liberties that we have left,” said Monica Lewis Patrick, one of the organizers of the demonstration. “This is a peaceful demonstration in honor of Martin Luther King, the peacemaker.” Read More 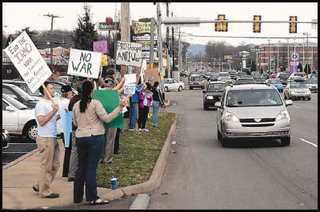 Thanks to James Brooks for the great article and to the Press for putting us on the front page of today's paper. The Kingsport Times-News also included the article by Brooks with this pic.

Channel 11 provided television coverage and Kacie Dingus of Tricities.com did a nice article yesterday with video.